You might be dreaming of a white Discus but I have to admit a fondness for the honeyed tones of wild cichlids, which are such an excellent foil to those blue and red highlights. Blessed with naturally soft water, a trip north of the border to visit the Fishkeeper Scotland stores always yields some treats. One such delight was the sight of wild Heckel discus (Symphysodon discus) at Fishkeeper Stirling, full of promise and ready to make their new keeper earn his or her turquoise stripes.

Unlike their domesticated counterparts, wild discus are the challenging, sensitive fishes that fuel the myths that translate into a mystique surrounding their gaudy captive cousins. For the dedicated keeper, they’re a very worthy challenge. 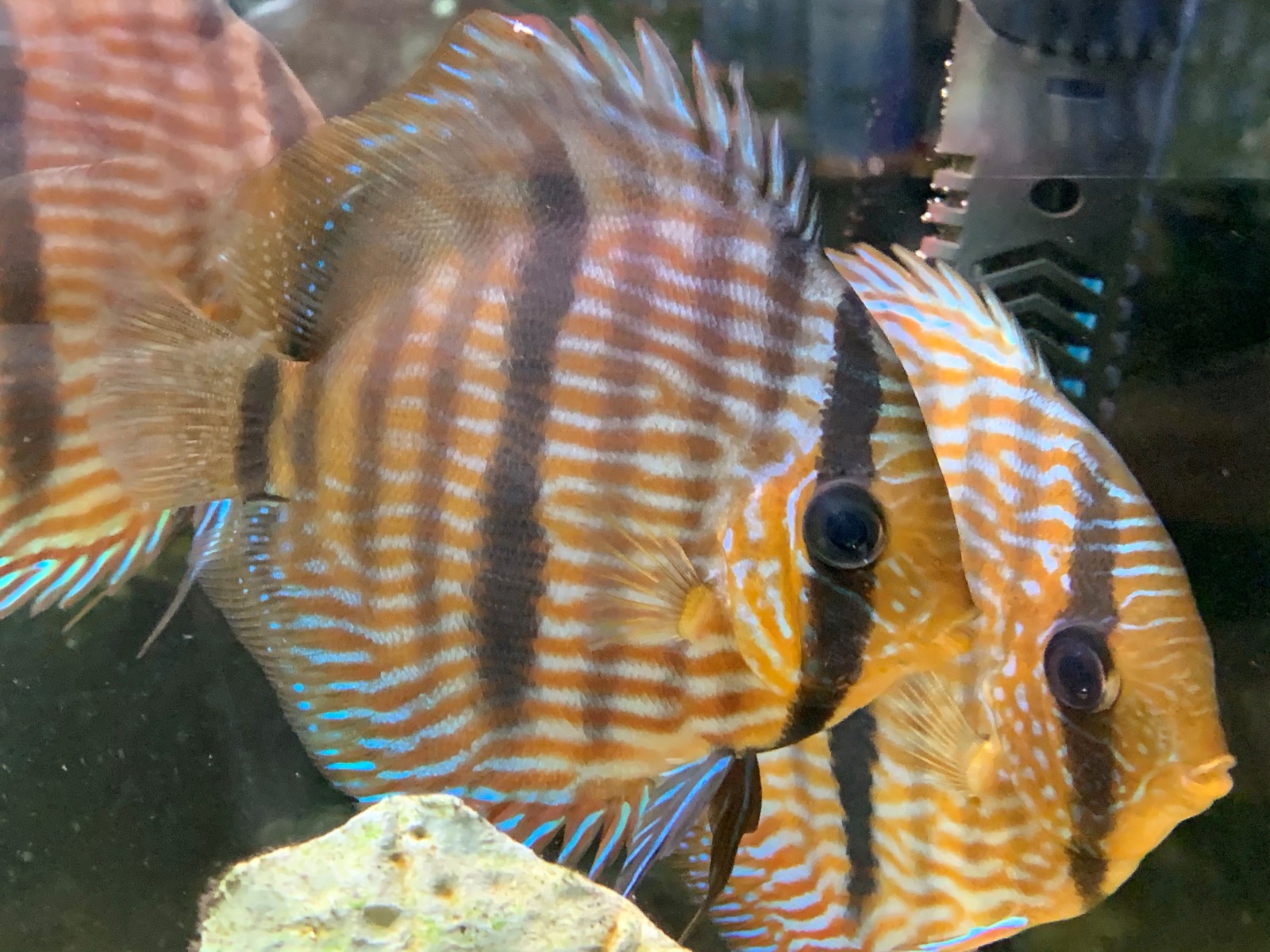 Common names can be a mixed blessing, they’re sometimes descriptive and occasionally rather insulting. Known variously as Sunburst, Hawkfish, or in the UK - Fathead anthias. Serranocirrhitus latus is a deep water anthiine that is far less demanding than its shallow-water kin, although it prefers an aquarium where it can lurk in a reef structure that provides a dimly-lit cave or two whilst waiting for twice-daily feeds. As this species undergoes the usual female to male gender development, pairs or groups can be housed together in large tanks providing the animals are of different sizes with a single larger male. For best results, introduce all the specimens at the same time but where this isn’t possible add the smaller specimens to the larger one, possibly with the distraction of a mirror to distract the established fish. This little cracker was seen at our Derby branch. 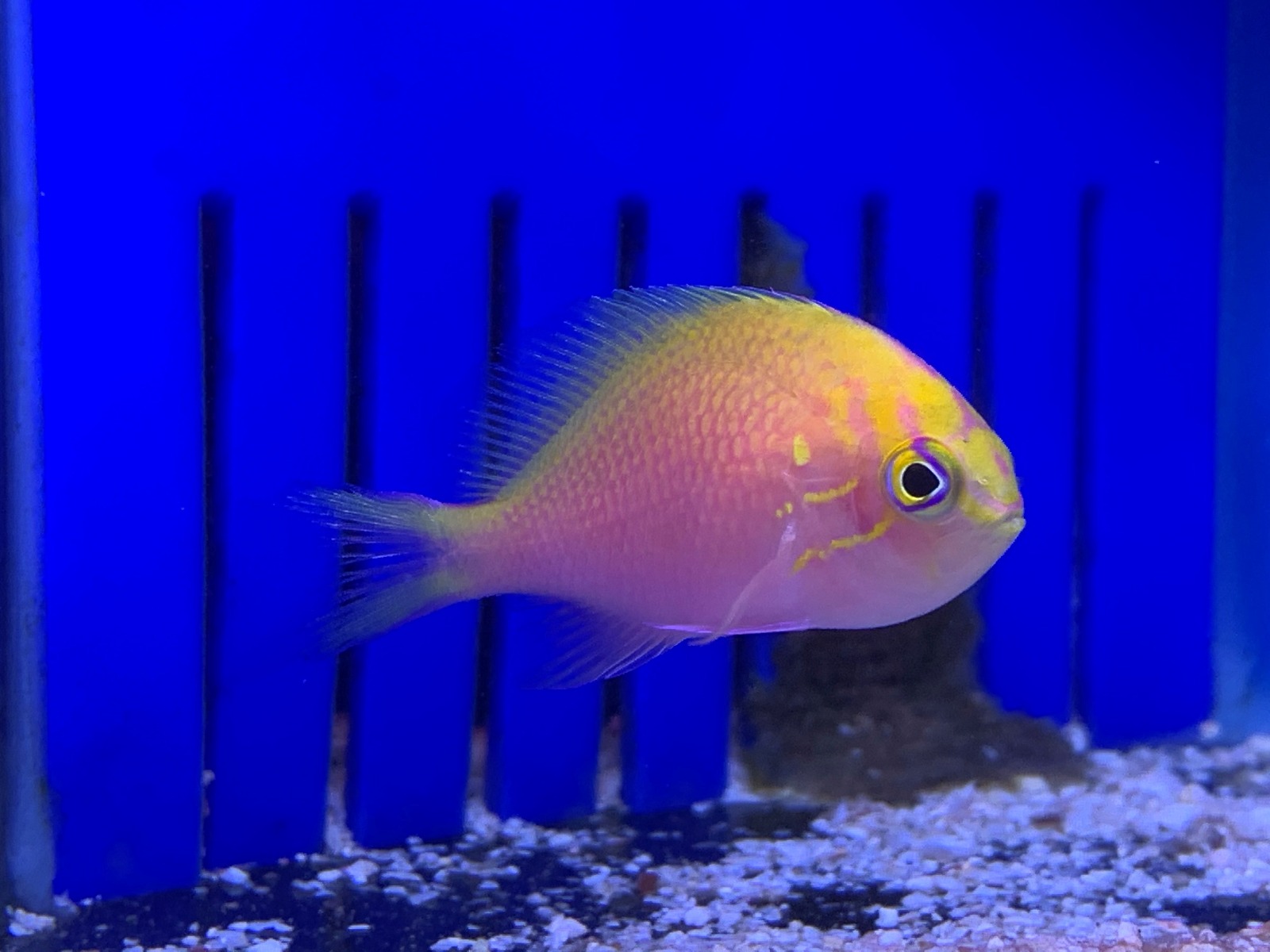 There was a time when ‘Peacocks’ of the genus Aulonocara were a fish prized only by enthusiasts, who would typically keep them in single male groups, while shops regularly had batches of brown fish that would produce a single coloured-up dominant male at a time, which quickly sold. Being less aggressive than mbuna they were always a trickier sell, as fewer people had a Malawi tank that wasn’t filled with rockwork and warfare.

Hybridising Aulonocara was frowned upon but as the females of most species were hard to tell apart, it made avoiding mistakes a difficult prospect. Then it happened, commercial breeders had crossed a peacock with an mbuna to give it the OB (orange blotched) gene and the Calico Aulonocara was born! Crossing various Haplochromines into these fish gave rise to the kind of fish like this one at Cardiff, perfect for adding colour to a community of reasonably rowdy rifts and hard to pin down to species level. 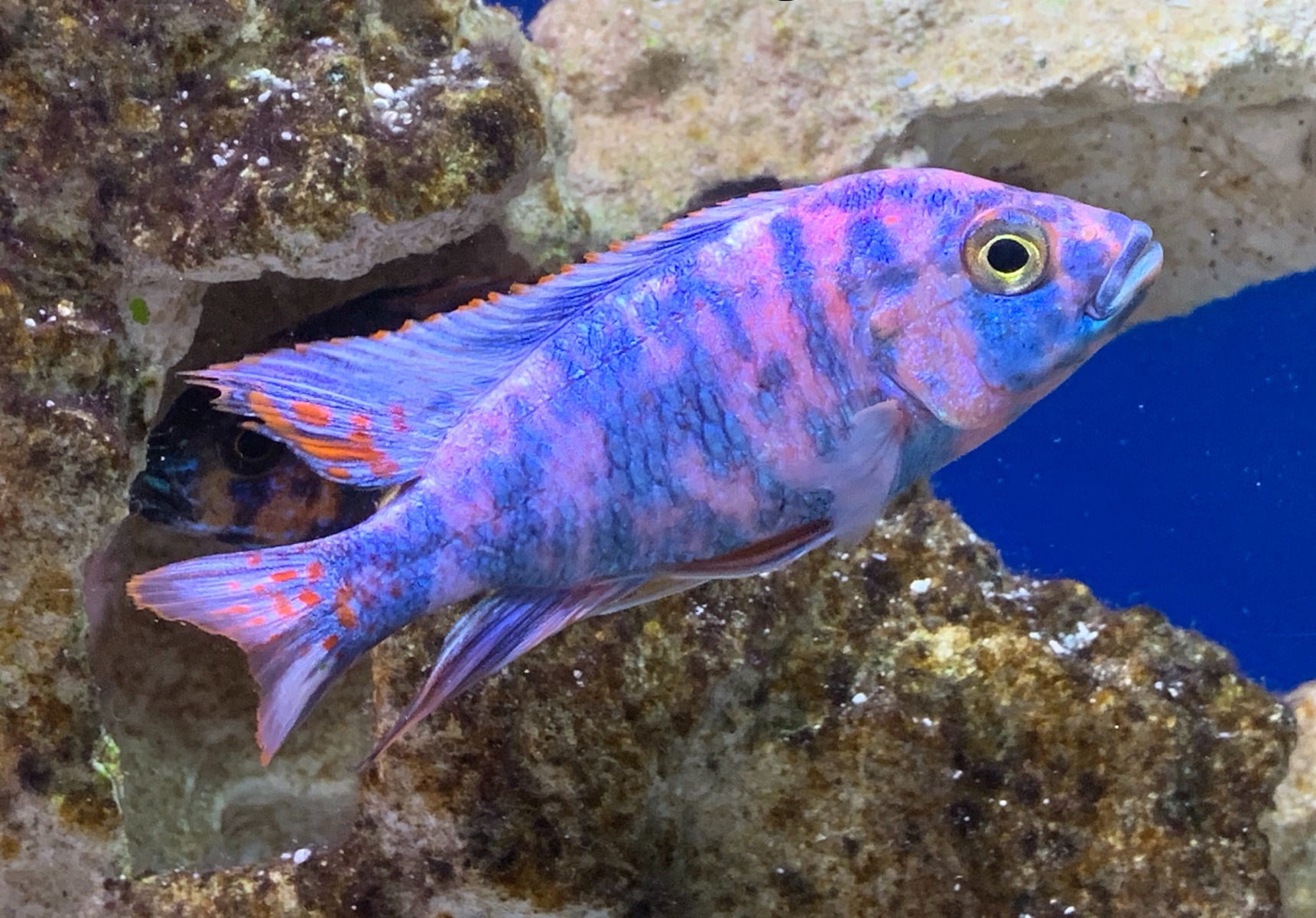 Everybody knows about Clownfishes living in anemones thanks to a certain film but for me, there’s a far more interesting group of fishes that live with an invertebrate partner in the form of a pistol shrimp. These Shrimp gobies are a diverse group and range in size and colouration to suit most tanks with a bit of sand and firmly secured decor that can’t be undermined by digging. This gorgeous Suntail goby (Amblyeleotris aurora) at Leicester is the perfect partner for either Alpheus randalli or A. bellulus pistol shrimps but can live without them as long as plenty of shelters is provided. 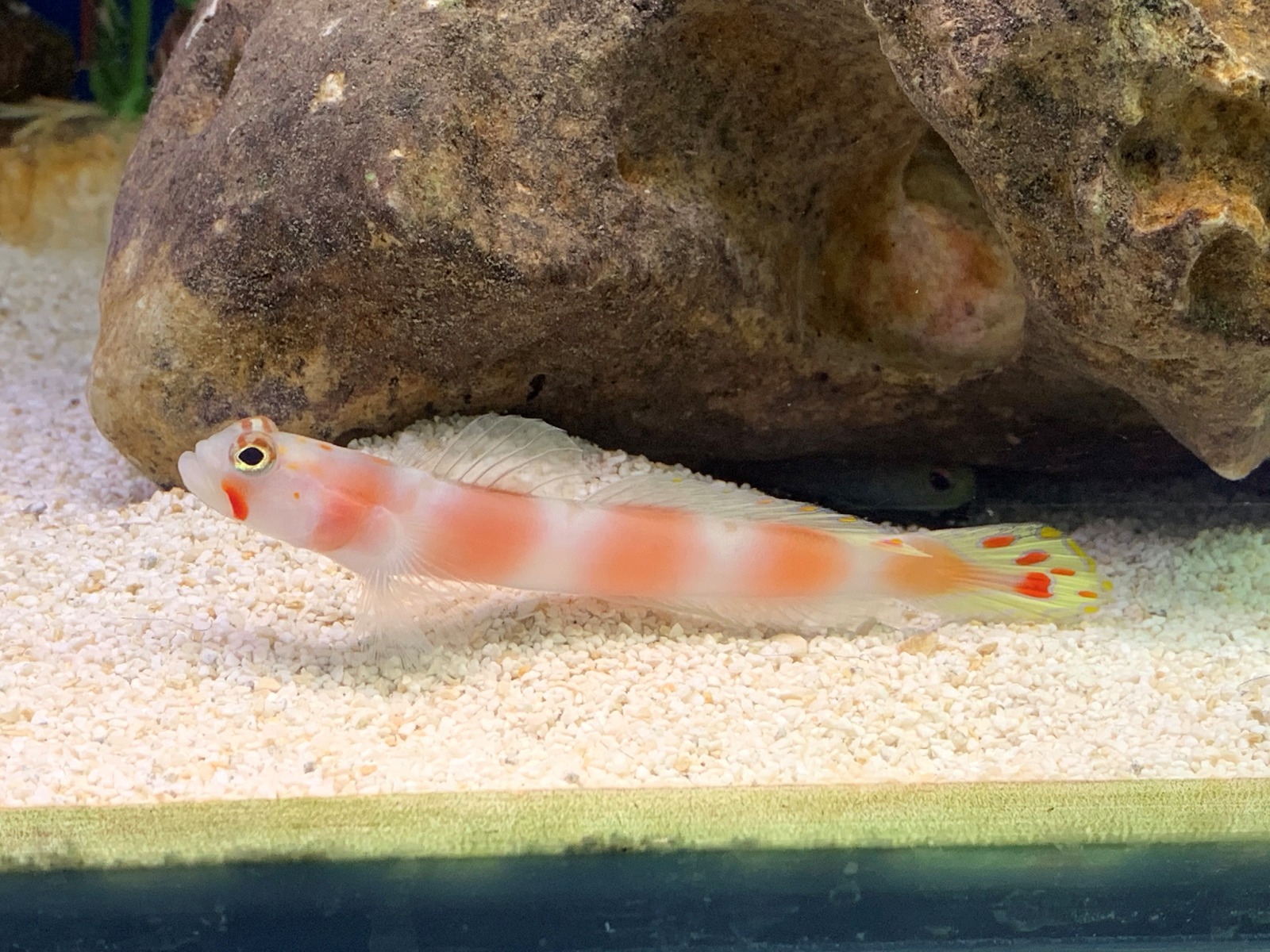 Some fish are so commonplace that it’s easy to overlook them. One such fish is the Leopard danio (Danio rerio ‘frankei’) that has been a familiar aquarium pet for decades. With spots that resemble a Brown trout and a similar body shape, these active shoalers are perfect for small, unheated aquaria where goldfish would be a messy disaster. Of course, they’d be equally happy in a huge tank with tropical tankmates too and this is why they’ve been popular with hobbyists for over fifty years. These were some of the largest I’ve seen and were amongst lots of more exotic treats at our Polhill store. 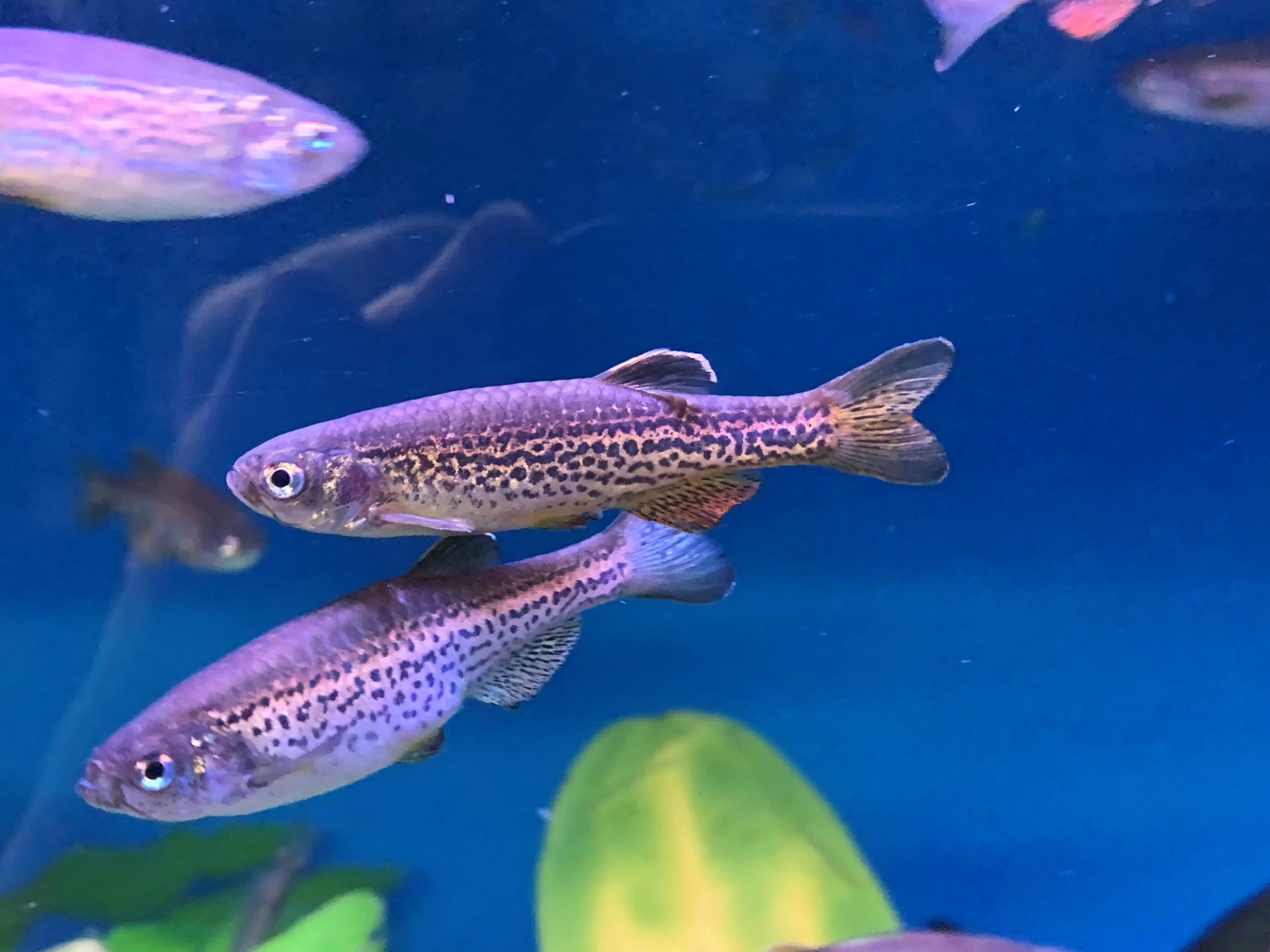