With the warmth of summer not yet a distant memory, it’s not too late to add pond fish. A time-honoured tradition of overwintering bargain koi in warmer surroundings seems to have been forgotten but all the while that temperatures remain reasonable, there’s a window of opportunity to make the most of some late season reductions. I’d be more cautious with fishes held in indoor systems but those outside will be as cold, if not cooler than garden ponds. A pond thermometer can be a useful way of keeping track of things.

Now’s the time of year when the focus starts to shift from pond fishes to tropicals and there are some treats to be found. Pike cichlids in the lepidota complex (Crenicichla sp.) like these at Tong are a tricky group of fish to identify to species level without locality data but this just adds to their appeal. These soft water beauties aren’t especially aggressive and will eat small tank mates with a predatory smile on their pointed faces. Outside of periods of breeding (some pikes guard their young for up to a year), these reasonably mellow Amazonians are great companions for Eartheaters and large characins. They always remind me of giant Kribs, especially with the rosy bellies of ripe females and that dark lateral stripe. 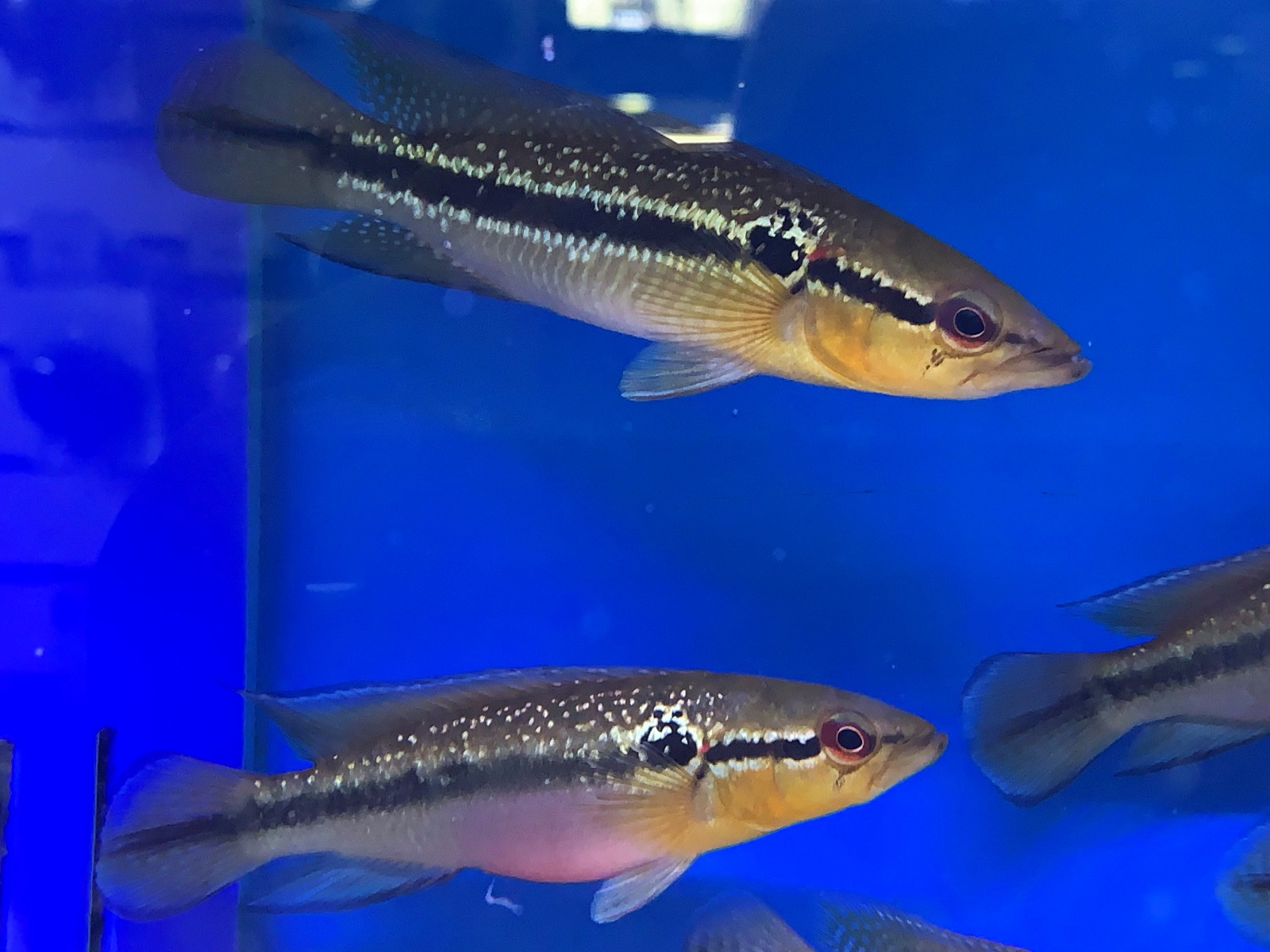 Few things are more exotic than corals and these fabulous Trachyphyllia in the recently refurbished coral trays at Thornbury were certainly eye-catching. These animals are demanding but their needs are well understood and they can be expected to thrive in a home reef. As with all chunky-polyped corals, feeding is vital to support good lighting and water chemistry. 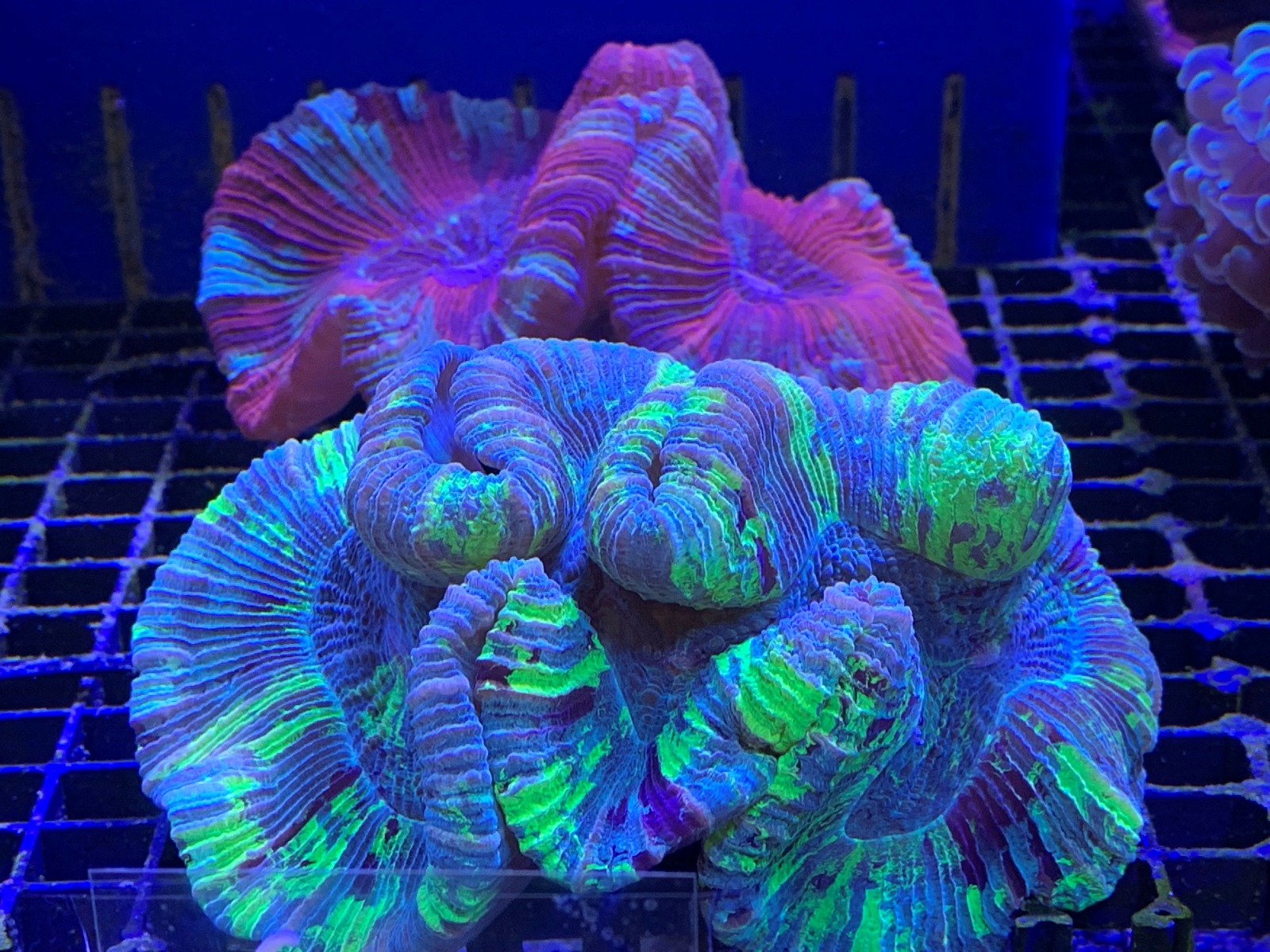 Marine fish can be difficult to collect from some regions and this means that some specimens are rarely seen as captives and command a premium. One such ‘celebrity surgeon’ is the Black Tang (Zebrasoma rostratum), a proportionally long-nosed fish with requirements similar to its congeners. This handsome fish at our Scotsdale store isn’t cheap but compared to an aeroplane ticket to see them in the wild, it’s a steal. 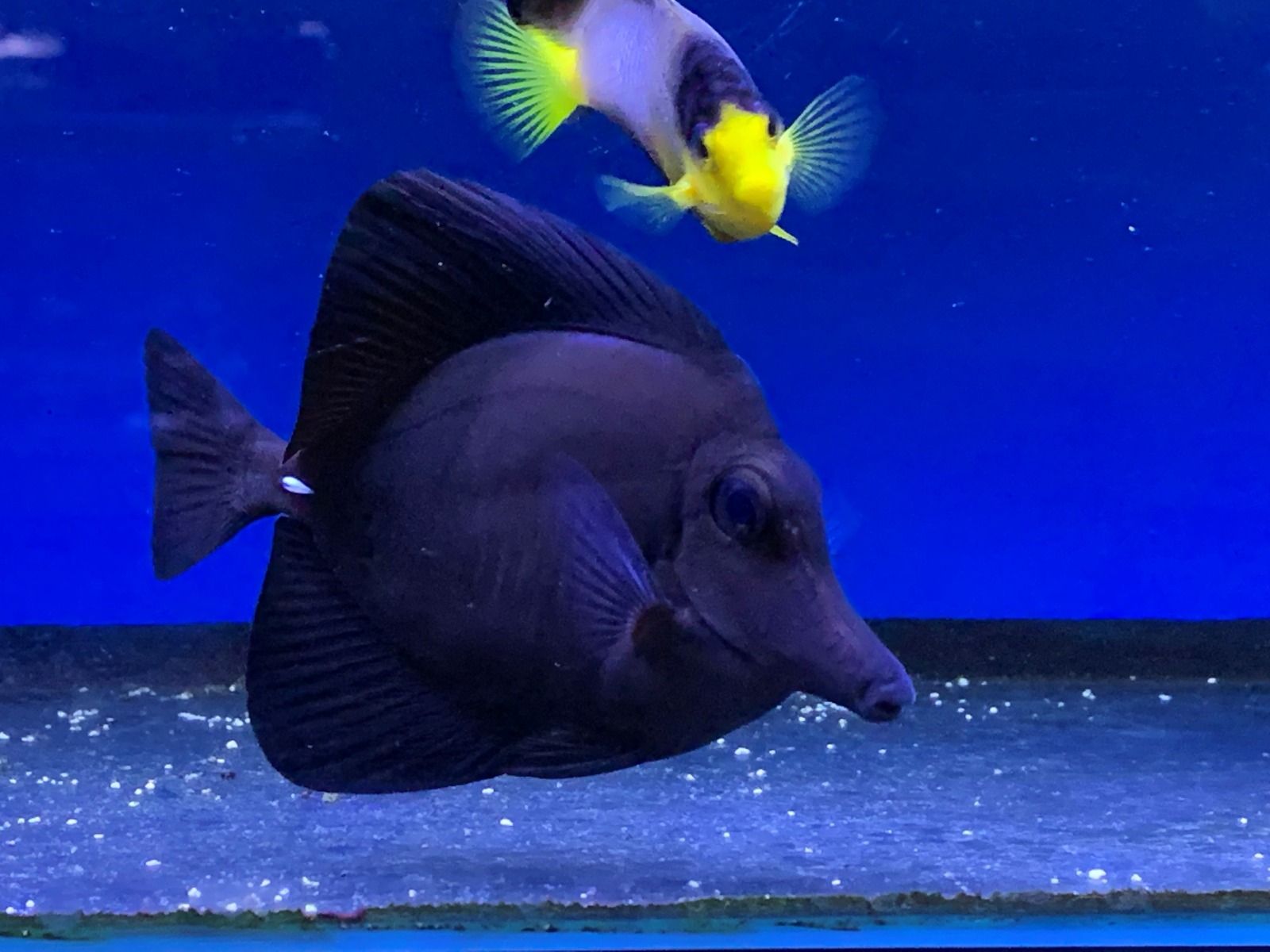 Discus may be the big, flat Amazonian cichlid with the best PR but it wasn’t the first and dare I say there’s a far more popular one that we all rather take for granted. Severums (‘Sevs’ for short) has been popular with those who have enough room to house them for decades and even beat discus in being bred into a gold form years ago. Rather obligingly, males of the Gold Severum (Heros efasciatus) keep the squiggly cheek markings of their green ancestors making them easy to sex. Like many of these laterally compressed cichlids, these fish thrive in really big tanks that allow room for mixed-sex groups to select their own mates and choose how sociable they wish to be. This fish at Shirley was one of a whole host of tropical treats on offer. 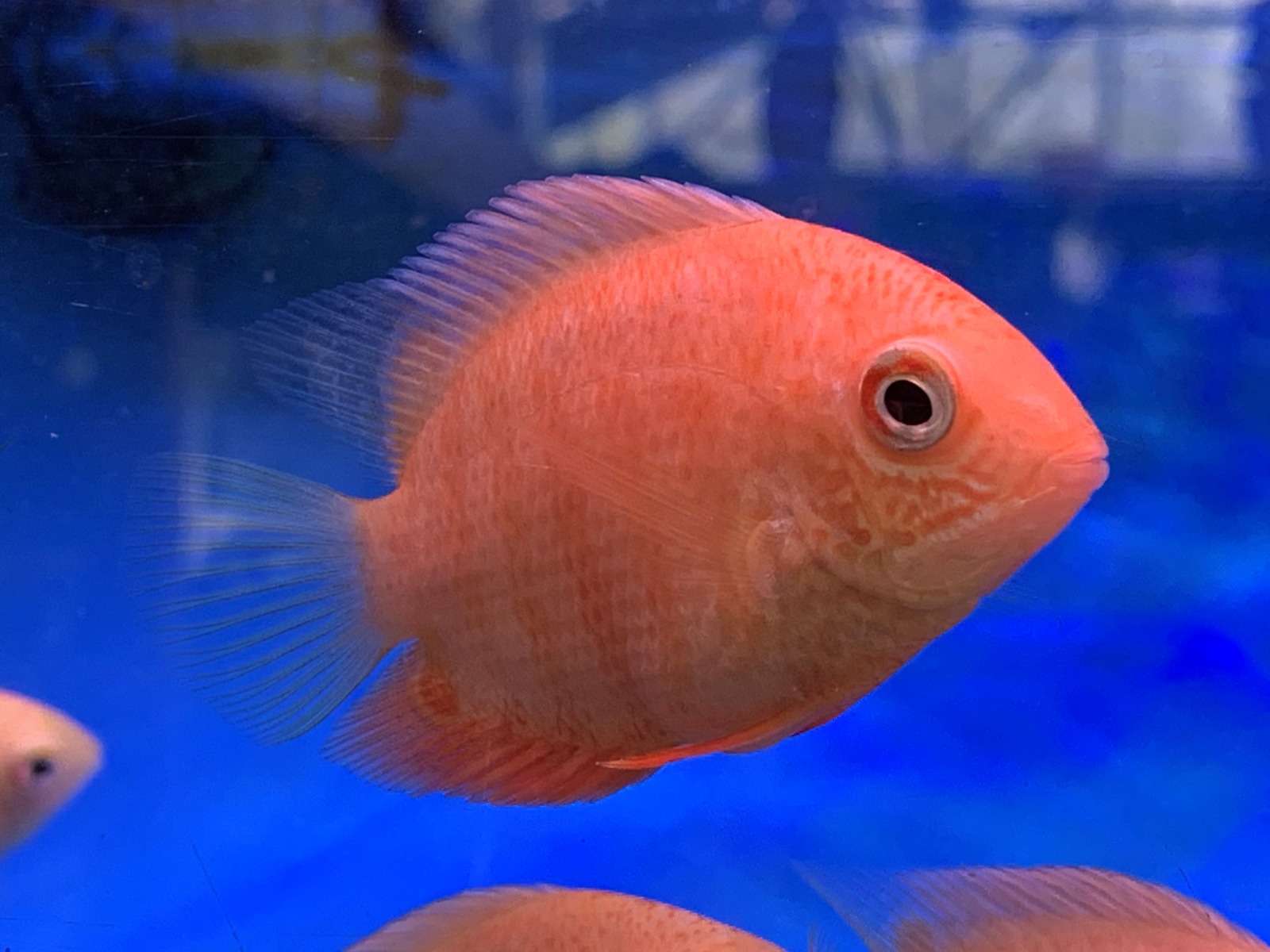 Some fish are just joyous. After seeing them trickling back into the trade a few years ago, it’s truly wonderful to see numbers of tank-bred Spotted Congo puffers (Tetraodon schoutedeni) appearing in our stores. These used to be extremely popular aquarium fish, peaceful (for a puffer) and even spawned by aquarists in the last century. If the thought of a Mbu puffer in a tiny package appeals to you, then look no further as these fish are fully adult at less than 10cm. You can even keep more than one, as the group at Woodford that this fish was part of, can attest. 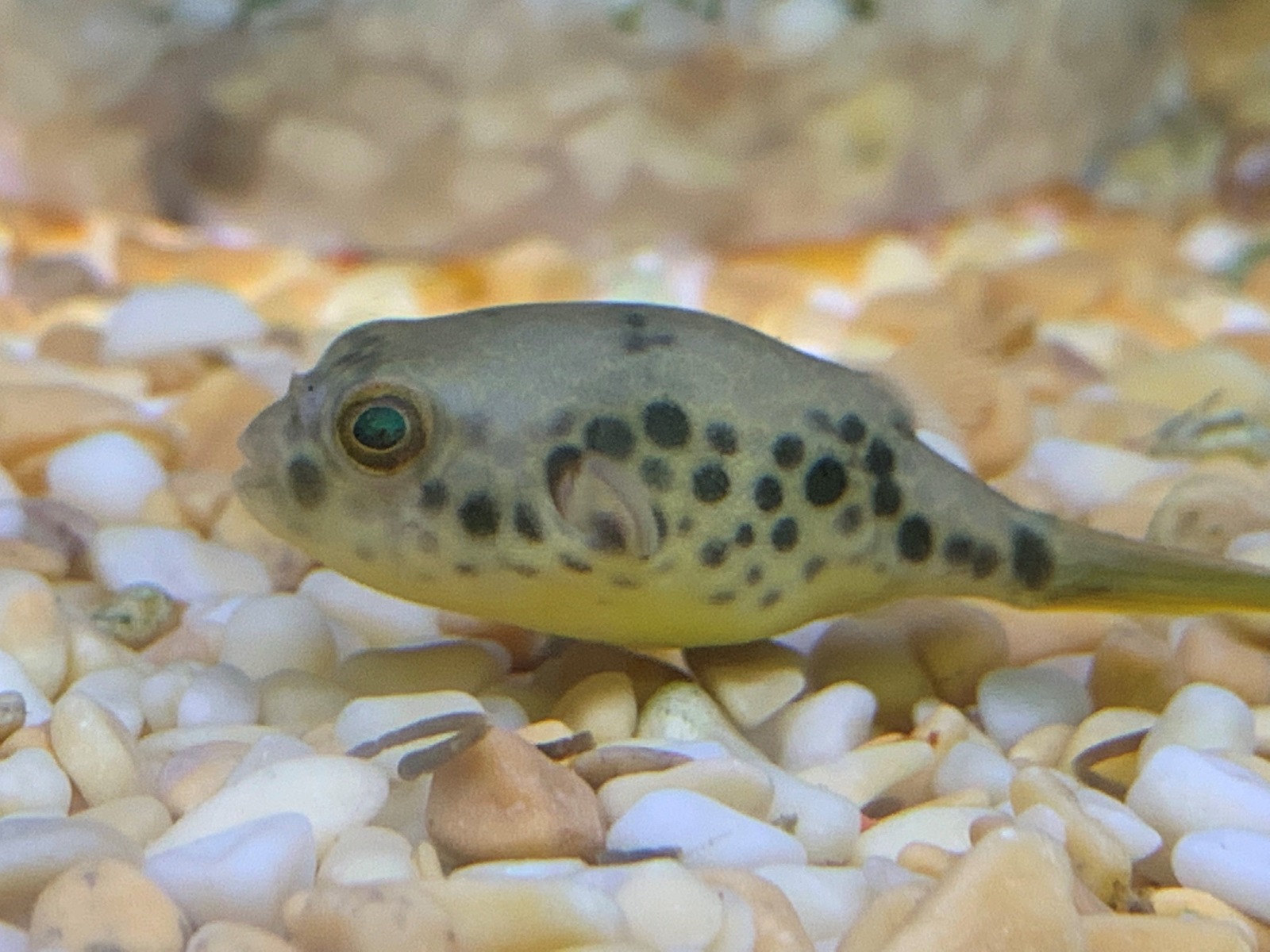