Some fish are so charismatic and enchanting that it can be their downfall. Everybody loves a seahorse but thanks to pressures on wild populations and the places where they live, these are fishes best kept by those who will dedicate themselves to breeding them in captivity.

This is not as daunting as it sounds, especially as all of the seahorses in our stores are captive bred and keen to do their bit for conservation. We don’t sell a lot of these amazing creatures but recently we’ve had a number of UK bred Dwarf Seahorses (Hippocampus zosterae) appear in our more specialised marine stores - these tiny animals have a long history in the aquarium and have modest demands (for marine fish) in all aspects other than feeding. In order to thrive, we’d recommend giving them unlimited access to tiny live foods and this can be made easier by establishing populations of suitable invertebrates in their aquarium before adding the seahorses. This tiny pony was seen during a visit to our Braintree  store but with such small numbers of these fish held in store, we’d recommend contacting your branch to check availability beforehand 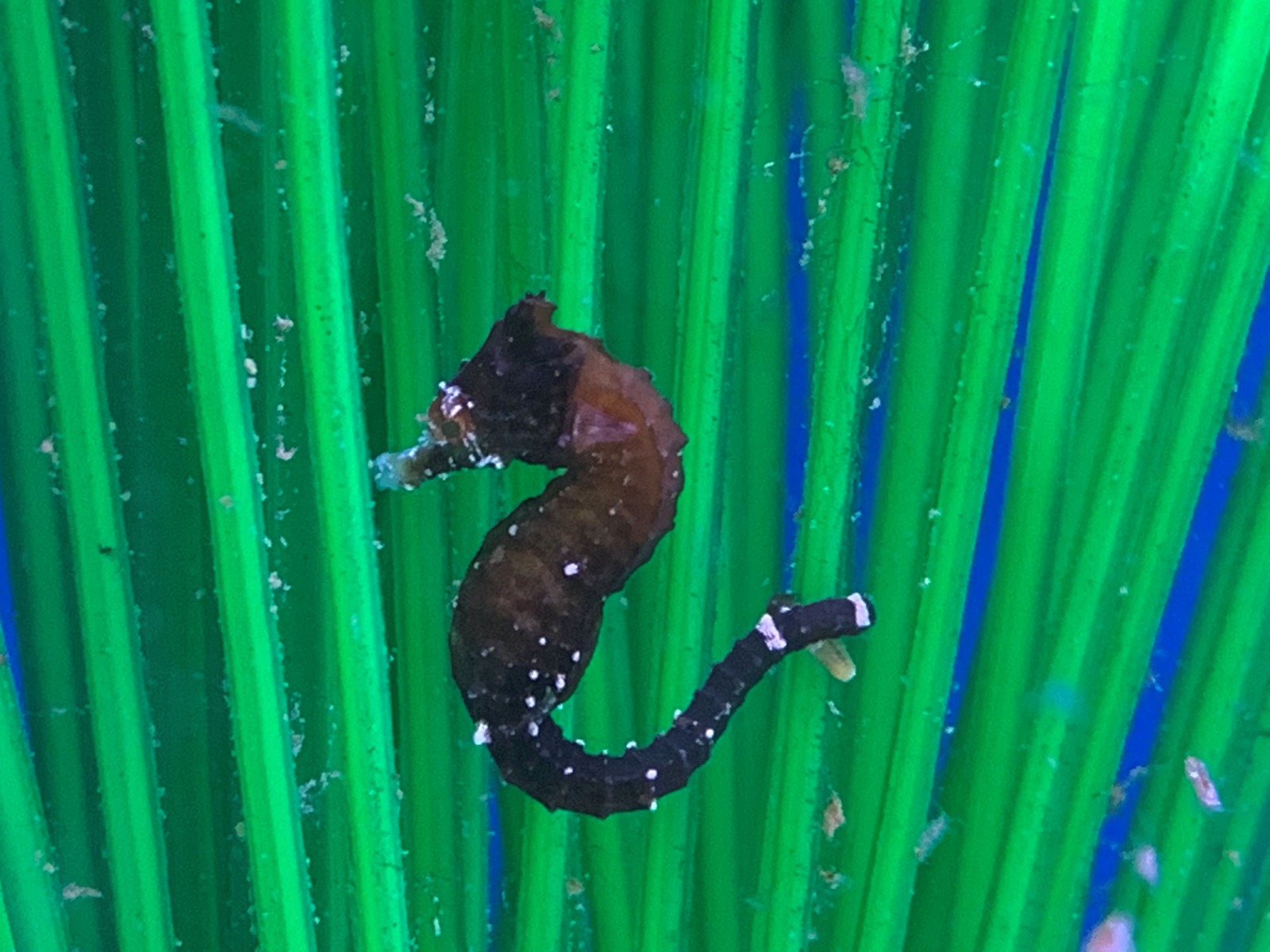 Fancy goldfish (Carassius auratus) are big, messy pets that come in a staggering range of forms, all of which, like pedigree dogs, are named. Everybody knows the Black moor but it’s just one amongst many varieties of telescope or Dragon eye forms which can come in a range of colours - as can be seen in this batch at our Summerhill store. Higher grade fishes such as these tend to have the high backs and short bodies favoured by Chinese breeders and such aristocrats deserve the kind of large, well-maintained aquaria normally given to demanding tropical or marine fish

Killifish have a reputation as fishes for the specialist and it’s fair to say that the glamorous and short-lived annual killers such as Nothobranchius are best appreciated in dedicated aquaria that cater to some of their more specific needs and showcase their gaudy colours.

Some of the non-annual species can make good choices for suitable communities though and the Gold form of the Cape Lopez lyretail (Aphyosemion australe) was one of the first of its kind to make an impact, having been kept in home aquaria since the 1950s. As you’d expect for such a trailblazer, this is a hardy fish when given softwater and the kind of plant-based furnishings that were a feature of early ‘balanced’ tropical tanks before the advent of power-filters and test kits. This handsome young male was a highlight of a visit to the Ashford store. 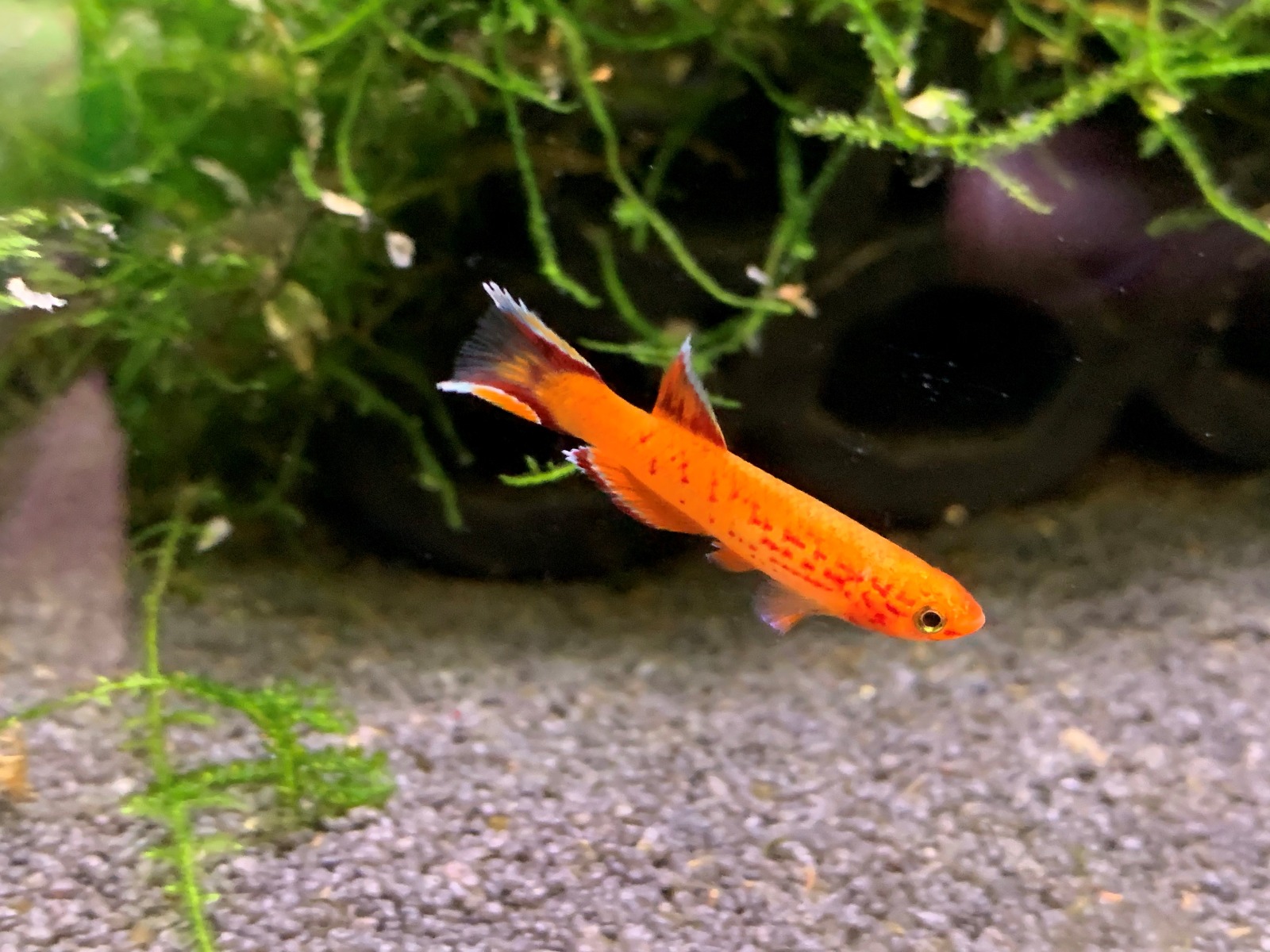 Convict cichlids (Amatitlania nigrofasciata) are rather notorious fish. Often used as an example of aggressive, prolific fish that breed and return from customers faster than they sell, convicts are hard to love. This reputation rather overshadows an intelligent fish with modest requirements that is the darling of behavioural scientists and is fascinating to observe. Did you know that female convict will vary the size of their clutch, investing in more eggs when using a more easily defended spawning site? Clever little fish.

If only they were a bit more peaceful and perhaps a bit more colourful. Step forward the Honduran red point or HRP (Amatitlania siquia), a recently described ‘blue convict’ that has all of the virtues with fewer vices. Since being introduced to the hobby, their biggest threat is being crossed with convicts and lost in their pure state. With this in mind, it was good to see a batch at our Pyle  store and a pair housed in a tank of 100 litres or more alongside robust shoaling community fish (Buenos Aires tetras ((Hemigrammus anisitsi)) or swordtails ((Xiphophorus helleri)) work well) would be a source of hours of entertainment. 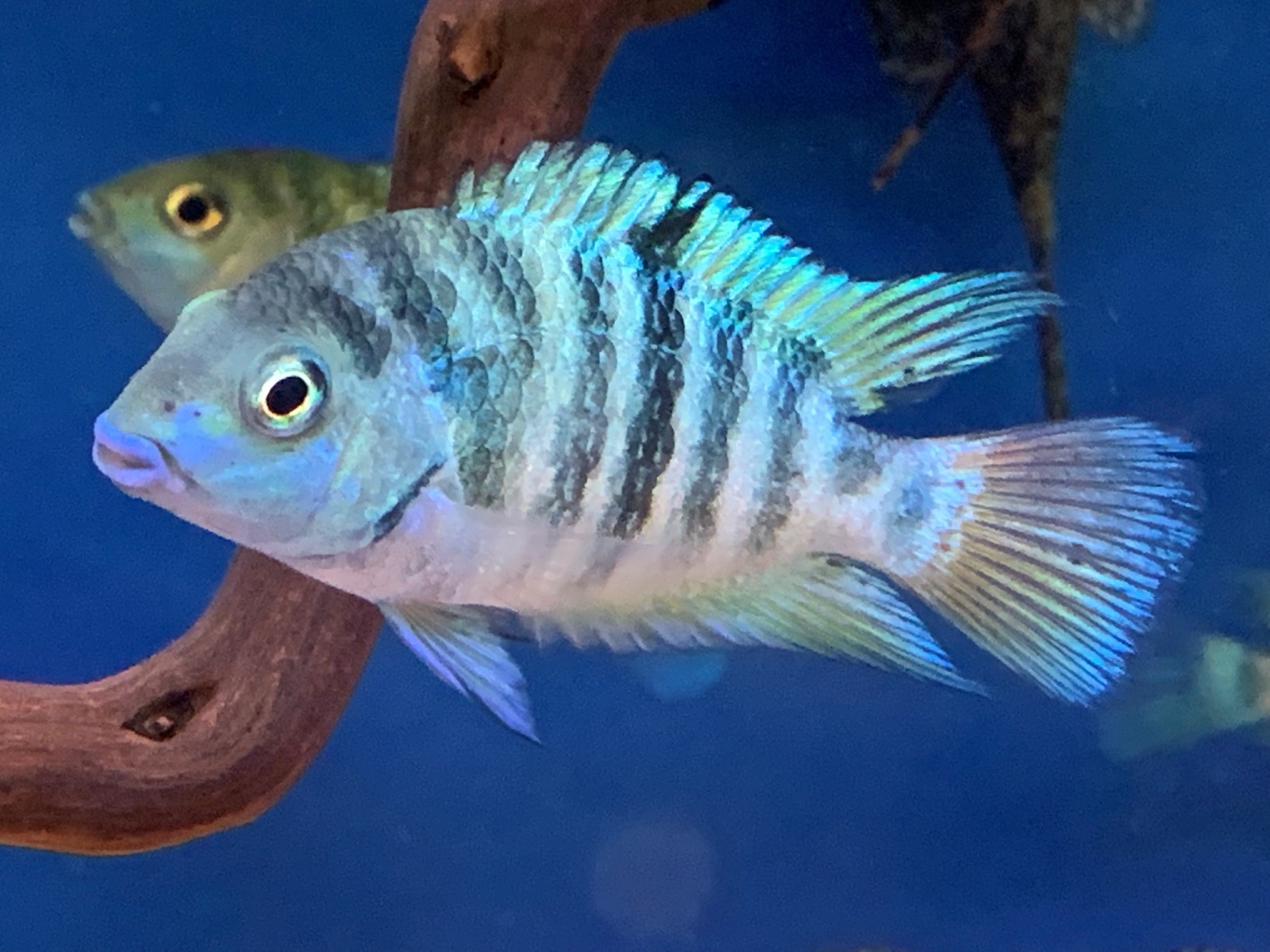 Talk tropical fish to anyone who’s ever kept them and it’s almost guaranteed that Angelfish will get a mention. Generations of fish keepers have kept angels, often with the familiar tale of rogue single fish-eating tetras and harassing bigger fish but becoming cherished pets in spite of these misdemeanours. Despite being mainstream staples, these are often misunderstood cichlids that should be kept in groups in big tanks, where pairs can form and interact with one another.

Whilst domesticated angels are found in almost every tank, a wild and unadulterated member of the family remained almost mythical - enjoying a sensitivity and aspirational reputation that makes Discus (Symphysodon) look like Platies. Wild Altum Angelfish (Pterophyllum altum) are delicate creatures found in only one or two collecting areas that export from the highly acidic, tannin-stained regions of Amazonia that these fishes call home. Many of us have taken the right of passage to acclimatise these rare treasures to aquarium life and tried, with mixed results, to breed them.

As with early experiences of normal angelfish, it seems that captive-bred fish are adaptable and far easier to keep, leading to the joyous sight of a tankful stuffing their faces at our Wenvoe store recently. These little mahogany-striped beauties will need similar care to discus and a big tank - adult altums can get 30cm tall. 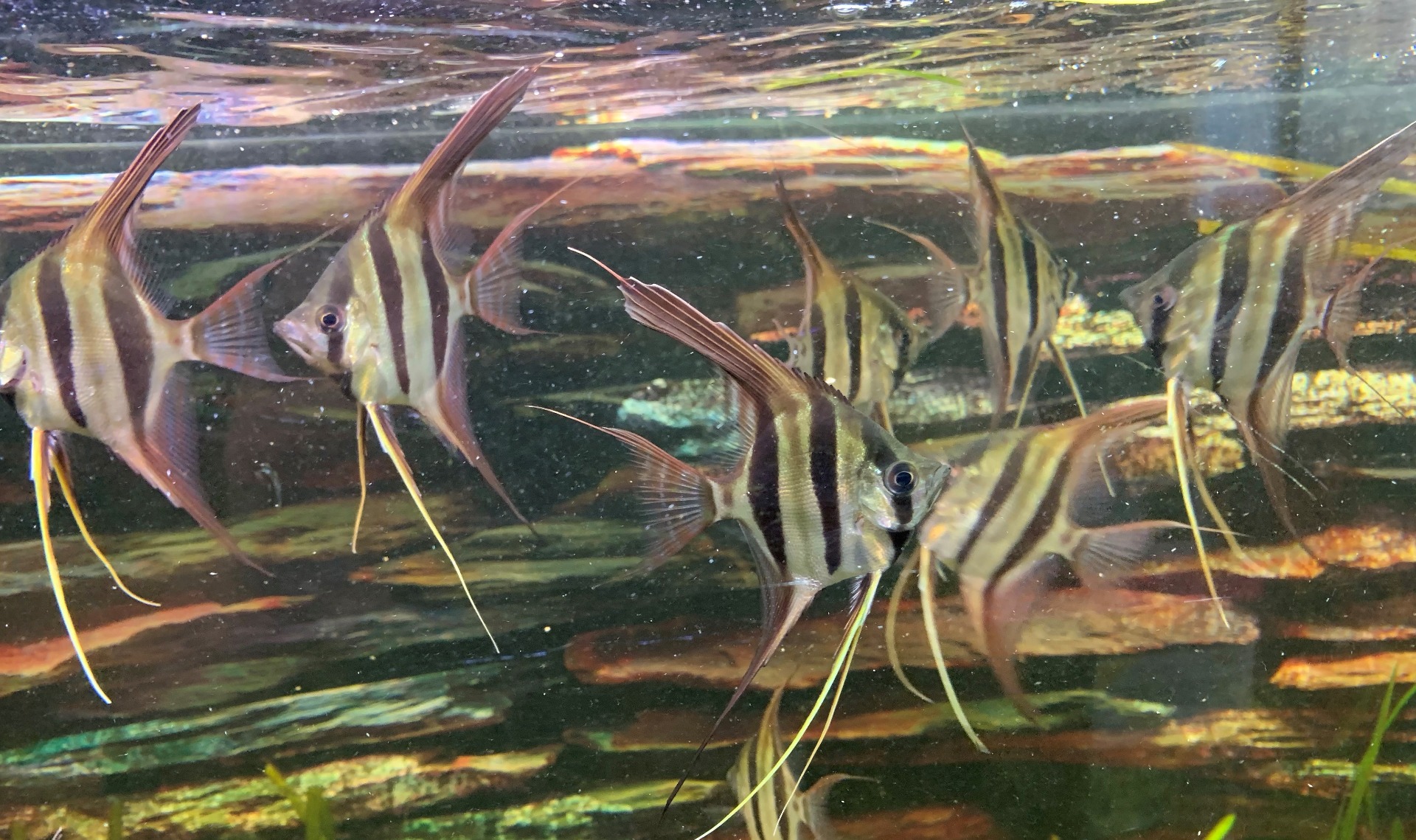 Freshwater puffers are always popular pets but tend to have temperaments that make them hard company. Some such as the giant Mbu (Tetraodon mbu) reach sizes that put them out of reach of average fish keepers, whereas the Pygmy puffer (Carinotetraodon travancoricus) is tiny but a bit of a nutter. One of the more placid members of the family is the South American puffer (Colomesus asellus) that thrive as a group in a good-sized aquarium and can be kept alongside other species that enjoy high oxygen levels, good water movement and don’t have long trailing fins. This group at Rutland were enjoying the chance to wear those ever-growing teeth on a clam, as well as enjoying the typical puffer diet of snails and frozen food. 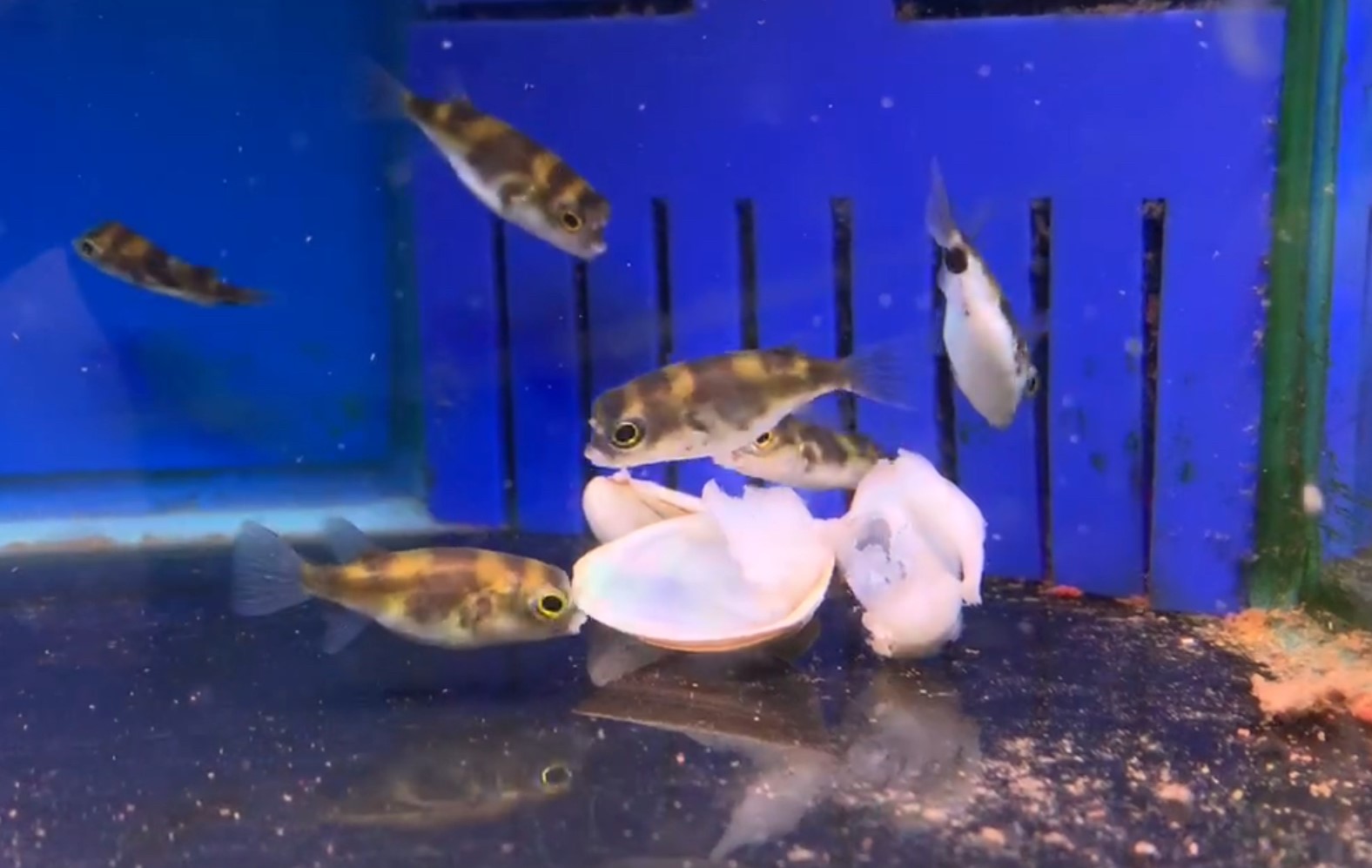