The LINI foundation has been carrying out their important work in Bali. Earlier this year, the foundation started work with a trial of re-stocking the local reef with cultured clownfish from their breeding centre in Les Village, North Bali. The breeding of marine aquarium species started in 2015 as part of an effort to offer new skills to marine aquarium fishers whose who have been working with LINI since 2010. They targeted fisher families, particularly women to be trained in the breeding of marine reef fish normally for the aquarium trade. Once the women from Les Village were trained, they continued to work at the centre, looking after all the aspects of the fish breeding activities. They have now bred several species of clownfish and the endangered species listed by the IUCN red list – Banggai Cardinalfish.

Les Village was chosen for the location of the training centre for marine conservation and aquaculture because the area has long been one of the main producers of marine aquarium fish in Bali. The reefs in Les Village are one of the main collection sites for the members of the Mina Lestari marine aquarium fishers’ group. LINI has been working with Mina Lestari to restore coral reefs since 2010. Re-stocking cultured clownfish onto the reef was the next step that the fishers’ group proposed to try as an experiment. Populations of clownfish have been long gone from the reefs in Les Village, mainly because this group of fish has been highly targeted for capture and sale to the marine aquarium trade. Therefore, this trial to re-stock the reefs with cultured fish is very exciting, particularly as the fishers have been actively involved in its planning and implementation from the start.

Five clownfish (Amphiprion ocellaris) and a single anemone were selected for the trial. The anemone was placed on one of the artificial reefs. To prevent the anemone from crawling away, and the cultured fish from being eaten by predators, the fishers placed a chicken cage over the artificial reef structure to protect the fish and anemone. At the time of the last monitoring, after 10 days of installation, it was clear that all of the clownfish had survived, and the anemone is getting bigger and is still inside the chicken cage. The plan is to conduct monthly monitoring to see if these good results will be maintained. 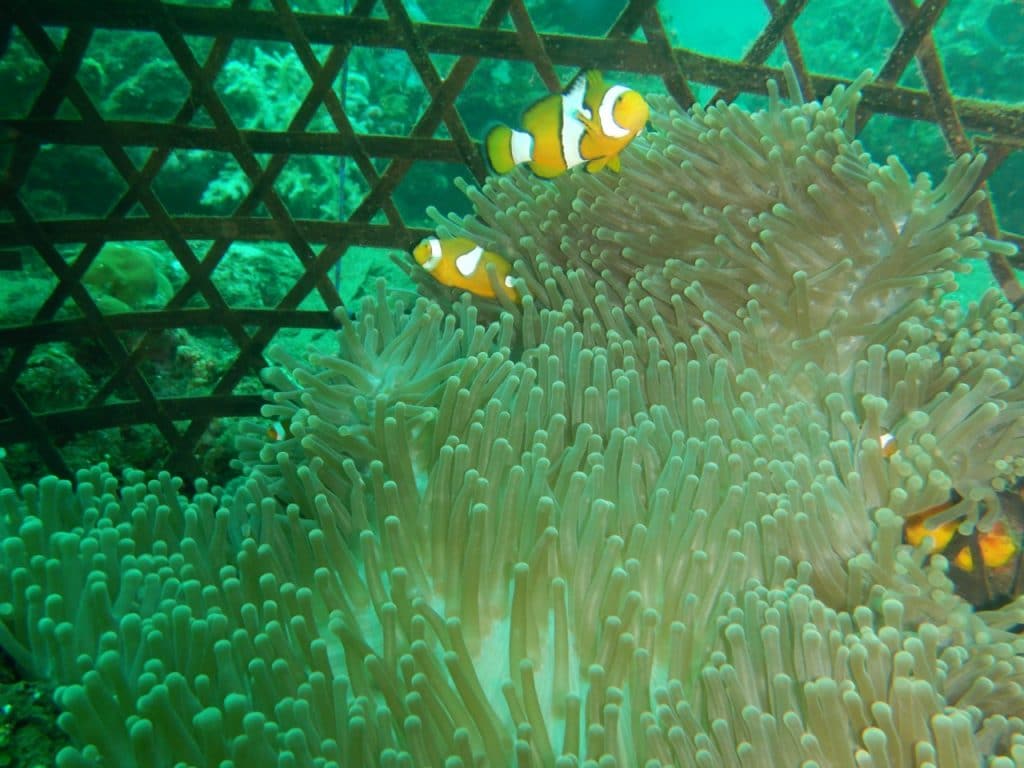 LINI have been very happy with the progress of the centre, where fisher families continue to earn money from working in aquaculture to supplement their livelihoods. It’s been particularly gratifying to see that the marine aquarium fishers’ group remains keen to actively participate in conserving the reefs that they all depend on, and that the group members are enthusiastically taking part in reef studies, including re-stocking the reefs with cultured fish.