Ponderings - An Introduction to Pond Plants

I’ve often thought there are two main kinds of people who keep fishponds, those who view their pond as a bit of an outdoor aquarium and those who view it as a wet flowerbed. Depending on which one you identify with, a pond can be either an opportunity to grow an exciting range of plants or a feature which needs plants to provide biological balance. Of course, many of us have a foot in both camps. 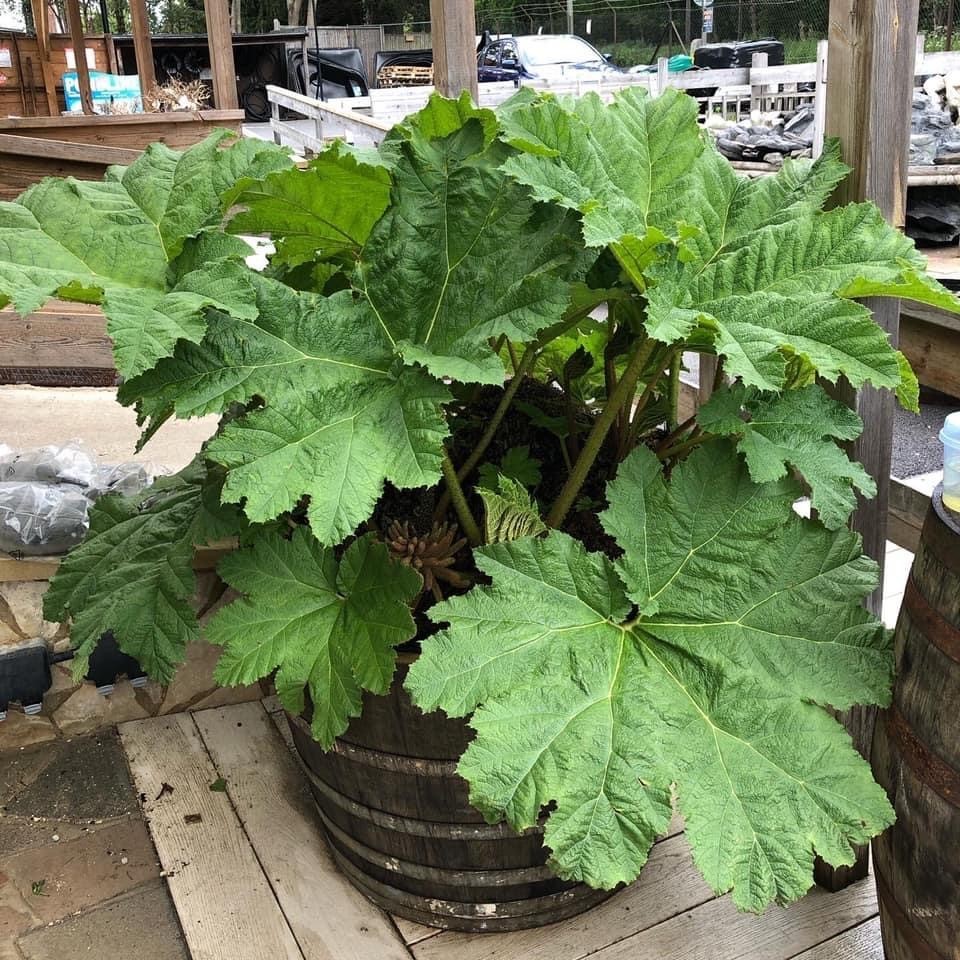 Firstly, let’s tackle the whole issue with the ‘balanced pond’ approach. It’s a very fine balance between having enough plants to remove all the nutrients that fuel algae growth and having an excess of submerged ‘oxygenating plants’ which can crash a pond by removing dissolved oxygen in the hours of darkness and suffocating the fishes, particularly the largest individuals. As these events tend to happen in the height of summer when the sun rises in what’s almost the middle of the night for many of us, they often go unwitnessed, and a few hours of sunshine has the plants photosynthesising merrily and hiding the evidence. Any pond containing fish and a large amount of submerged vegetation (or algae) will need aeration overnight, so you can see that using oxygenating plants and a solar-powered pump https://www.fishkeeper.co.uk/pond-products/pond-pumps/solar-powered-pumps can be a hazardous situation. Likewise, turning off your pond pump at night is likely to lead to similar problems. As this issue is entirely due to the actions of submerged plants, the best choice of plants for improving water quality are those which have their roots in the pond but their foliage above water. Note that this is mostly a fish problem – amphibians and aquatic insects often have means to breathe air and those which don’t will generally avoid unsuitable habitats. 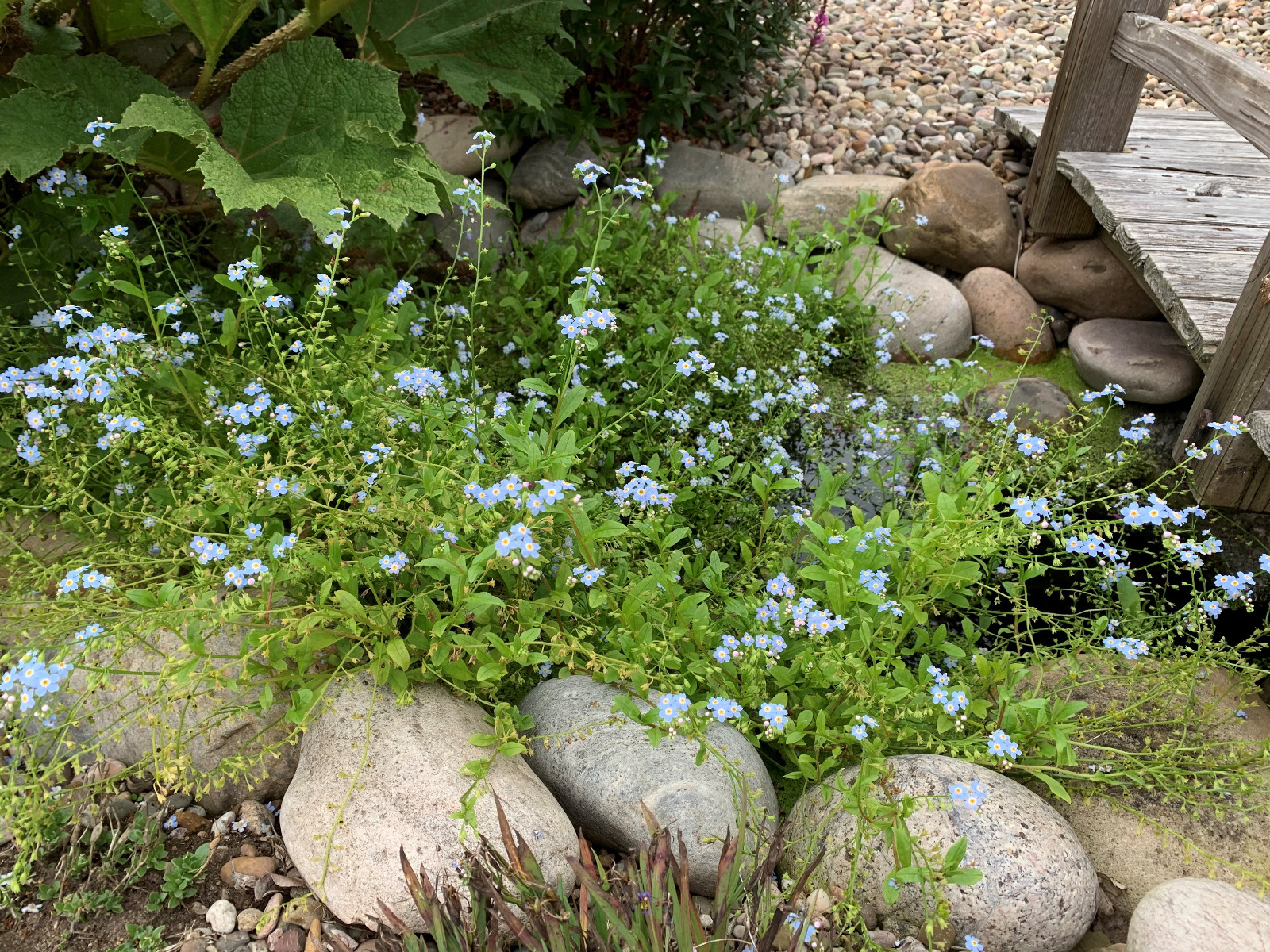 No mention of wildlife is complete without talking about native versus foreign plant species. It’s true to say that there’s a strong argument for choosing native species for wildlife ponds thanks to ancient associations between native plants and animals but in general terms, many of the ornamental forms are sibling species and for our purposes, they might actually be a better fit. A newly emerging dragonfly doesn’t much care whether the reed stem it climbs is a native Typha latifolia or an Asian Typha minima but only one of these is a realistic choice for most garden ponds or water features. The best option is to use native plant species where possible and fill in the gaps with either more decorative or more appropriate plant choices.

Having established that plants shouldn’t be your sole source of oxygenation, it’s fair to say that it’s easier to control algae by planting generously. Plants control algae growth in two main ways, through competition for nutrients and shading them out. 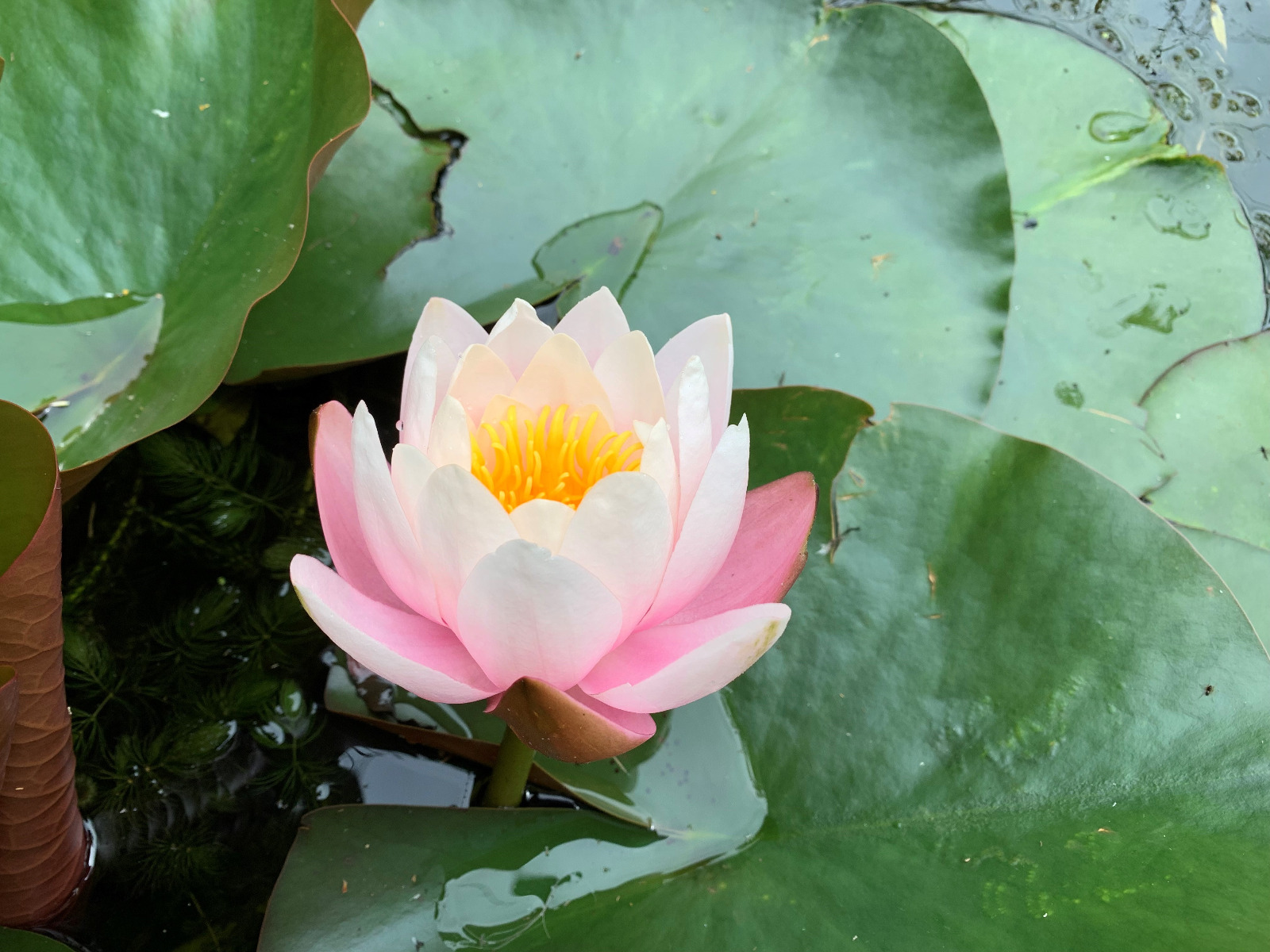 Oxygenating plants are the submerged fast-growing ‘weeds’ that play a vital role in mopping up nutrients that otherwise fuel algae growth. They’re also an important habitat for aquatic wildlife and spawning sites for goldfish. Legislation has made some of the more traditional choices unavailable and these invasive species which do rather too well are now best avoided. As their sales are banned, you’re unlikely to find them for sale in responsible retailers but they may be offered by water gardeners thinning them out, or shops unaware of the legalities.http://www.nonnativespecies.org/beplantwise/what-can-i-do.cfm

It’s important to note that many of the submerged plants that are suitable for use, including some native species, are closely related to the invasive thugs. Confusion over the correct identification of Red-stemmed parrots feather (Myriophyllum brasiliensis) and the use of its name as a synonym for the banned Parrots feather (M. aquaticum) can lead to alarm. This can be made even worse by the knowledge that our native Water milfoil is Myriophyllum spicatum – as with many popular garden plants, it helps to know the proper names of things and to do a bit of research if you’re in doubt. Whichever species you choose, the more you have the more likely you are to beat issues such as algae. Just make sure you provide aeration as noted above.

If your pond is already green, avoid plunging these plants into the murky depths as they may struggle to grow when deprived of light. Start them off in the sunlit shallows before lowering them to the desired depth and don’t be afraid to plant them in a basket, even if it only contains aquatic gravel to keep them in place. A notable exception to this is Hornwort (Ceratophyllum demersum) which grows without rooting.  Without a source of elements such as iron found in good planting media, they may get chlorotic (the plant version of anaemic) and struggle to compete with algae. Deficiencies can be swiftly resolved with liquid aquatic fertilisers https://www.fishkeeper.co.uk/blagdon-flora-boost-250ml and crucially these don’t contain any of the phosphates or nitrates that encourage algae.

Many submerged plants can grow with their foliage above water, and this often gives rise to different foliage types. When transferred into deeper water, it may take a week or two for a plant to adapt its growth form.

There are plants which can be simply thrown in, these are the floating plants which often include tender species which are similar to garden bedding annuals in their seasonality. During the long, hot days of summer, these can come in very useful for providing shade and competition for nutrients when algae growths are at their peak. Whereas native forms such as Frogbit (Hydrocharis morsus-ranae) produce overwintering buds which winter in the depths, tropical species such as Water lettuce (Pistia) are best added to the compost heap in the autumn as the first frosts kill them.

A number of species will produce floating leaves from roots found far below in the base of the pond, these are the deep-water plants, a category which also includes waterlilies (Nymphaea). These are often very vigorous plants which can swamp small ponds and it’s worth noting that the very largest water lily varieties grow the fastest, making them cheapest to buy. It’s rather ironic that dwarf and miniature lilies are the most expensive, but this reflects the time it takes these plants to reach a saleable size. Small varieties are worth the money, as these are long-lived plants that won’t need constant management to keep them under control. All waterlilies large or small share a need for sunshine, rich soil, and calm water – splashing from fountains or waterfalls will effectively drown them and the waxy surface of the leaves should stay dry to allow the plant to respire. For this reason, it’s best to lower new lilies into the depths gradually, placing them on marginal shelves or the odd brick to enable them to Any plants that are shy to flower can be improved by using fertilisers designed to be pushed into their baskets https://www.fishkeeper.co.uk/laguna-plant-grow-fertilizer-pond-spikes-3-pack or they may require repotting and dividing to reduce congestion. For ponds with more water movement, the superficially similar pond lilies (Nuphar) will give lily pad leaves together with giant buttercup flowers that become fascinating seed pods.

One of the most attractive of the plants in this group is the Water hawthorn (Aponogeton distachys), a free-flowering and beautifully scented plant which tends to become dormant in summer at the height of the pond season, making it look like an empty basket of mud. Take a punt on that pot of mud and you’ll be amazed at the flowers that appear in the cooler months, as well as the floating oval leaves.

Although it feels suspiciously like ‘everything else’ the final category is that of marginal plants. These actually include some moisture-loving perennials you may be familiar with from other areas of the garden, such as Calla lilies (Zantedeschia aethiopica) which thrive with their feet in the shallows and their head in the sun. As you can imagine, there’s a wide range of depths that suit these plants and some even prefer to be seasonally wet or dry if you get really into it. Most will happily grow in a wide range of depths but as a broad guide, won’t appreciate having their foliage submerged. This group contains some of the most hard-working decorative plants, as well as the reeds and rushes which remove pollutants and provide useful habitat for insect life. The good news is that you really can’t have too many marginal plants and they provide many of the services to improve water quality that their oxygenating relatives get the credit for. These plants can even be the basis of a ‘plant filter’ which specifically targets nitrates and phosphates allowing even large, destructive koi the benefits of plant power.

As with any area of the garden, it’s good to look at flowering times to make sure there’s a long season of interest and nectar availability, during the peak of the season our stores often have weekly deliveries so there’s usually plenty of highlights to choose from. 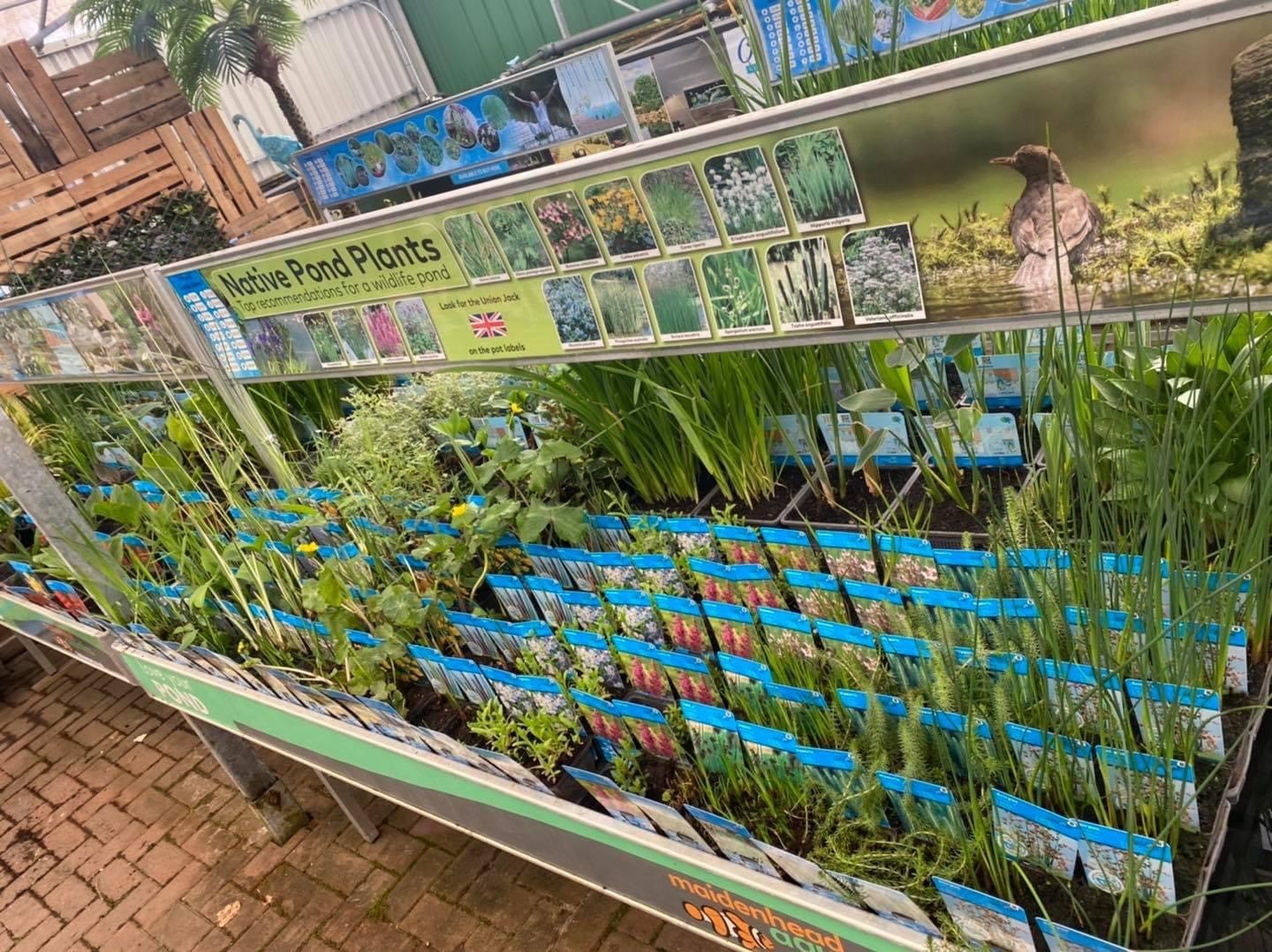