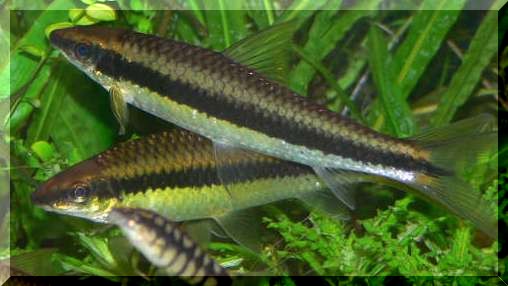 In all of the established literature, there is a fish consistently praised for it's effective ability to control many types of algae commonly found in the home aquarium - the Siamese Flying Fox (Crossocheilus siamensis). In more recent times this planted aquarium 'must have' has been confused with similar fishes and has itself been seen under a variety of different names, including 'Siamese algae-eater' and the abbreviated 'S.A.E.' As with many common names, overlap between similar fishes can be problematic. Older literature refers to the Siamese Flying Fox as Epalzeorynchus siamensis.

The original Flying Fox (Epalzeorhynchus kallopterus) first introduced to aquarists is a species that now finds itself in the same genus as the popular but troublesome Redtailed Black Shark (E. bicolor) and shares with it a modest appetite for algae and a territorial nature. This handsome fish is a good tankmate for barbs in a robust community tank but is too aggressive for the average peaceful plant aquarium. 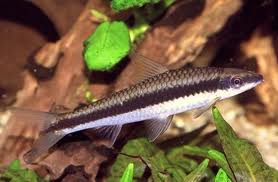 The fish most frequently mistaken for our subject is, rather ironically, related to some very effective and desirable algae eaters currently becoming rather fashionable thanks to a surge of interest in Asian Cyprinids. This aside, the frequency of this error has earned Garra taeniata the common name False Siamese Flying Fox. As might be expected from a family commonly known as the Stonelappers, this fish will eat some algae but exhibits a level of territorial aggression high enough to prove a nuisance in many aquaria. Unfortunately, many exporters supply this fish under the wrong name and perpetuate the error. This may be linked to an incorrect photograph used in the otherwise excellent Baensch Aquarium Atlas series (Mergus) where both volume 1 and the photo index 1-5 depict a juvenile Garra. The numerous cases of mistaken identity have literally given this fish a bad name and a more enlightened approach reveals this fish and it's close relatives to be worthwhile algae eaters suited to active community aquaria that benefit from the strong water movement that they prefer.

Having introduced the two species likely to be encountered in pursuit of the genuine article, some notes on telling them apart are relevant. Both species likely to be confused are arguably more attractive fish and have more distinctly marked patterns. The most reliable distinguishing feature of Crossocheilus is the absence of any markings in the dorsal fin. Unlike the boldly marked finnage of the look-alikes, all of the fins are colourless apart from a dark bar in the middle of the tail - the end of the black line running the entire length of the fish. Although this line is also found in Epalzeorynchus, this fish also has dark markings in the dorsal and anal fins. Garra is the most colourful fish and normally has yellow pigment in the dorsal fin and no black-bar through the middle of the tail. A further difference is the definition between body markings - both look-alikes share a crisp line between body colours whereas Crossocheilus look decidedly 'smudged'.

Having eliminated the look-alikes you can be certain that you have the hardest working fish in the planted aquarium, a social fish best kept in small groups, which can be expected to reach around 12-15 cm in length. Most of the fish in the UK market are from farms in Indonesia but exhibit their ancestral preference for soft water with reasonable current and low nitrates. They can have a tendency to jump when first introduced to a new environment so care must be taken in the case of uncovered aquaria. In terms of stocking levels, an aquarium 90 cm long can house a group of three adults. Young fish can be kept in smaller aquaria but when properly maintained, they can outgrow small tanks in a matter of a few months. A range of temperatures from 20 to 26 centigrade are suitable but ensure the combination of high temperature and low oxygen levels are avoided. As with many algae eating species, these are fish of moving water and appreciate a good current and regular water changes.

Although most effective at controlling algae when not overfed, these fish will happily eat a quality flake food and enjoy spirulina pellets as well as the usual live and frozen foods. They are also useful for controlling planarians that may occasionally be a problem in systems with organic debris and inputs of livefood and plants.
Categories Aquarium
Share

After what seems like a lifetime of hearing ‘Nemo’ and ‘Dory’ shouted in our stores, it seems that ‘Puff’ might become the next big thing. For viewers of Netflix, another familiar fish becomes ‘as seen on TV’.

Tis the season for goodwill to all and this includes pets. I’d like to think that we all know the value of the companionship and pleasure that our wet pets give us and so it’s nice to include them in the festivities. So, what do you get for the fish that has everything?