Nano Tanks - No Thanks!

Let me start my ramblings with a confession. I Tappers, being of sound mind in an occasionally sound body, have run small aquaria in the past.

In my quest to fill my home life with as many fishes as possible, I’ve had made to measure tanks on windowsills, bedside cabinets, alcoves and all manner of little niches. One doesn’t get up to fifty tanks without displaying a bit of creativity. This piece is more about the general reduction of aquarium sizes and some of the impact that this has had on the hobby.

Early days of our hobby were constrained by technology - aquaria were constructed from angle-iron with putty that needed regular replacement, or rarely a single piece of blown glass that had no joints to leak. This is reflected in aquarium books of the time, where species that needed larger accommodation were noted as especially challenging and even mild-mannered cichlids had a bad rap.

Silicon sealant was one of the major advances in the hobby and made larger aquaria possible, as well as removing the need to dismantle setups regularly as putty failed. We now had the opportunity to buy aquaria that the pioneers of our hobby could only dream of!

The age-old recommendation for new fish keepers was to start with a good-sized aquarium, with prospective marine hobbyists especially warned of the instability of small volumes of water. In a world full of attractive fishes, starting with a tank that could be easily overstocked was a common pitfall. Maddeningly, small tanks were the preferred choice of parents looking to keep the cost of goldfish-keeping down, rather ironic considering these are some of the largest fish sold in shops but plagued by decades of goldfish bowls.

Taking the sheer number of abused pet goldfish out of the equation, the average size of home aquaria was probably 2’ (or 60cm) or 70 litres if you’re one of those millennial fish keepers who think in volume rather than floor area. Too small for most marines, too small for adult goldfish but suitable for a wide range of small, peaceful tropicals.

The trouble is, at a time when tank sizes were shrinking we didn’t think about aspects of fish other than their physical size. Take tetras, for example, many are shoaling fishes but enjoy a little personal space. This means that a shoal naturally spreads and occupies more space than many aquaria can accommodate, with the result that the more testy types get a bad reputation. Place the same shoal of Serpae tetras (Hyphessobrycon eques) in a two-metre aquarium and you’ll get a  totally different outcome to the same fishes in a nano tank. This doesn’t mean that tetras are a poor choice for small aquaria - just make sure you select alternatives such as Ember tetras (Hyphessobrycon amandae) and consider that even small fishes like to avoid their rivals on occasion. 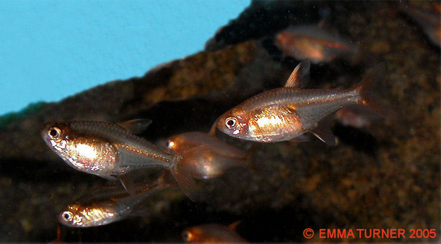 Dwarf cichlids are another group that suffer from small tank issues. Like their larger relatives, they’re essentially oblivious to fishes that don’t intrude on their breeding territory but this is generally larger than small tanks can accommodate. This means that their neighbours are constantly in their territory and remain a perceived threat. Even in the days of larger average sizes, it was a familiar tale of woe when customers called to ask for guidance when a parental pair of dwarf cichlids had pinned their tank mates to the opposite end of the tank in an effort to protect their young. It’s impossible for me to look at Kribs (Pelvicachromis pulcher) without having flashbacks to my first pair doing exactly this. It’s true to say that many of these cichlids are more comfortable in the presence of ‘dither fish’ (usually shoaling tetras or barbs whose role is to act naturally and assure the dwarves that there are no predators about) but these should not be targets of constant aggression in confined spaces. Interestingly, even some of the heavyweights at the other end of the size scale are surprisingly placid when housed in tanks large enough to satisfy their spatial requirements. Of course, when I say large in this context I’m talking about aquaria of three metres or more in length which are commensurate with dwarf cichlids in a few hundred litres. 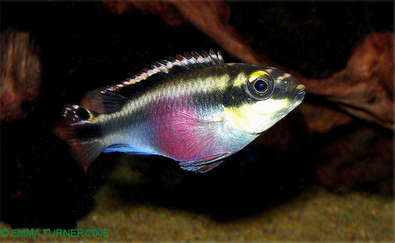 Moving to marines, you can see that they are often totally unsuited for life in a small glass box. Without wishing to offend anyone, saltwater fishes are often chosen on the basis of colouration rather than character and this can go very badly for species such as tangs, which typically roam large areas grazing algae on the reef. This unavoidable consideration, coupled with the rise of social media, has given rise to the pejorative term ‘Tang police’ for people who point out their unsuitability for small systems (more power to you!) and for me, many marine species fall into this bracket - bored and aggressive without the right social groupings and requiring room to get out of each other’s personal space in order to be compatible. Take the familiar examples provided by Finding Nemo, where unscrupulous retailers were offering tiny tanks complete with two Clownfish (Amphiprion ocellaris) and a Regal tang (Paracanthurus hepatus). The tangs inevitably succumbed to stress-related health issues but the clowns stood a far better chance of survival thanks to a few factors, mostly innate.

For a tang, hepatus are home-loving and tend to associate with stands of Pocillopora corals which they use as shelter when not feeding in open water or grazing on algae. This limits their range but they still deserve a tank the size of a sofa and are large fish. The trade in this species through initiatives such as the LINI project is sustainable and benefits the preservation of wild reef habitats, so don’t be mislead into a black and white attitude towards imported specimens but it’s fair to say a cheap Regal is best avoided to ensure good practice in the supply chains.

By contrast, Clownfish are captive bred and ideal for smaller tanks. They’ve evolved with a tendency to stick closely to an anemone host, meaning they’re far more suited to small tanks than goldfish. Born into aquarium life, they associate humans with food and understand living behind glass. Of course, the anemones they’d frequent in the wild can easily be the size of small aquarium, so don’t expect them to share a nano tank without a bit of friction. 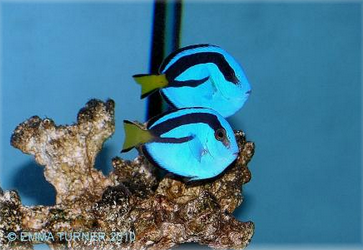 I think I’ve bored you with negativity long enough, let’s look at the options that these tiny aquaria provide. For the right species, they can provide suitable housing - it’s just a case of doing a little homework first. I’d always suggest starting with a tank that equals the old 2’ to offer a broader range of options and if in doubt, go large - there’s no such thing as too big.

So how do we solve the ancient small tank = cheap kids tank conundrum? I’m a big fan of small temperate fish, so I occasionally do crazy things. Last summer I placed a number of White Cloud Mountain minnows (Tanichthys albonubes) into a garden pond with a section of artificial stream. With a volume of 5,500 litres and around 6 metres of stream as well as a large pond to choose from, I was interested to note that all the fish chose to live in a section that combined all the things that minnows dream of in an area of about a metre. Provided with a reasonable current and some plant cover, the modest requirements of a small shoal can be offered in a filtered nano tank with a clear conscience. 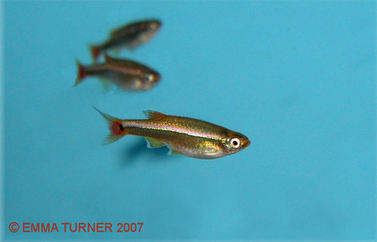 Add a little heating to cater for a range of preferences and your choices extend to the perfect choice for planted nano tanks - the brightly coloured crustaceans such as Crystal bee shrimps (Caridina cantonensis) that are bred into a wide range of colours and always fascinating to watch. Other species such as those from the Matano lakes of Sulawesi prefer warmer, harder water.

I’ve mentioned Ember tetras above and there are a range of miniature marvels such as Liquorice gouramis (Parosphromenus sp.) that thrive in acidic water the colour of black tea choked with dead leaves, or Pygmy pufferfish (Carinotetraodon travancoricus) that combine cute looks with sociopathic tendencies and are best appreciated in the splendid isolation of a species set up. You’ll find these and plenty of other suggestions in our databank and probably even more choice in store. Small species have really big potential.

Marine tanks can be miniaturised with a bit of effort and many of the off the shelf options have already made life easier. As we’ve seen, a little knowledge of the life history of prospective pets can have a huge bearing on how well these little glass rock pools fare. It can be easier to stock salty nanos with invertebrates such as coral-friendly Sexy shrimp (Thor amboinensis) that get rather lost in larger systems, or Boxer crabs (Lybia tessellata) that are tiny wonders. 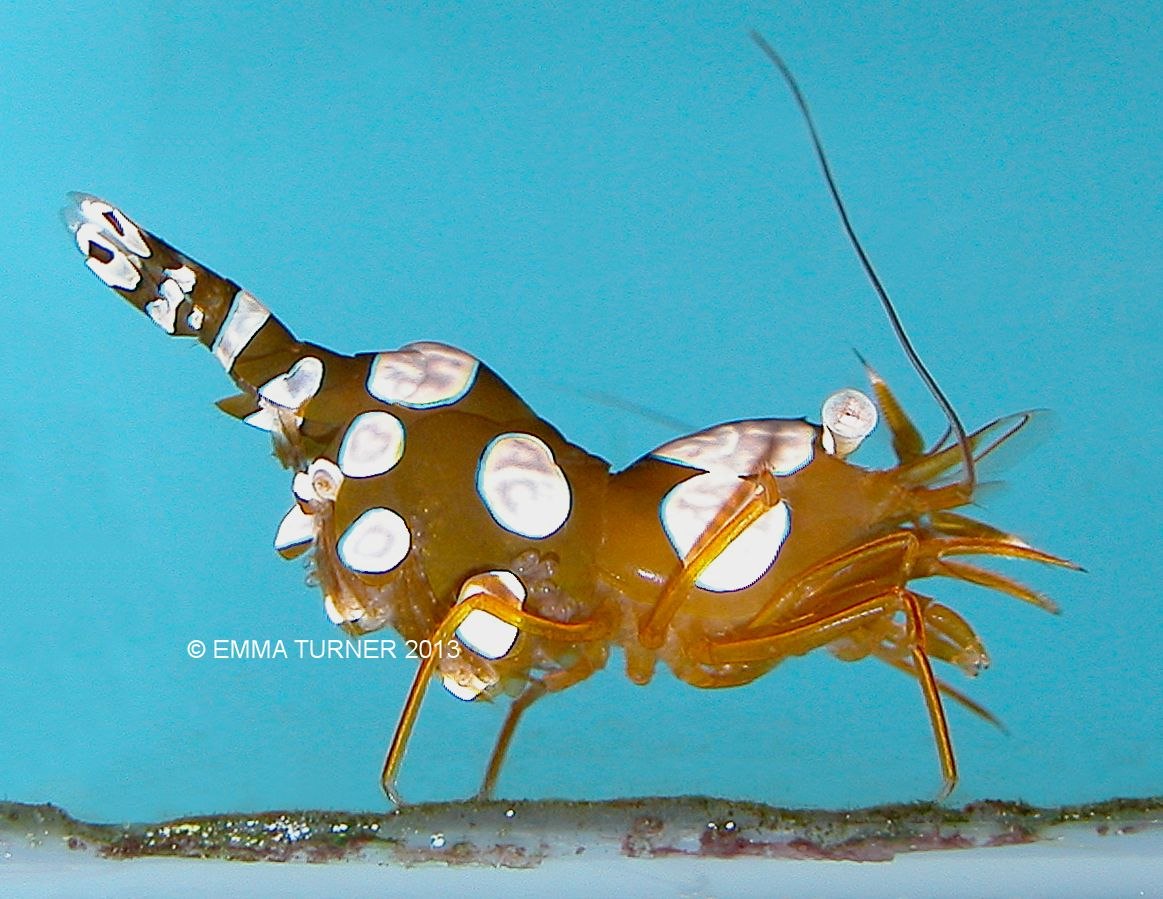 In terms of fishes, the diversity of niches on the reef means that a number of great choices are available, all happy to live in a tiny patch of real estate without wondering what’s going on in the wider world. Many of these are blennies or gobies which combine muppet looks with comparatively big brains. The Gold-streak blenny (Escenius stigmatura) is a great choice and even nibbles on a bit of algae occasionally, which always helps with the housework. 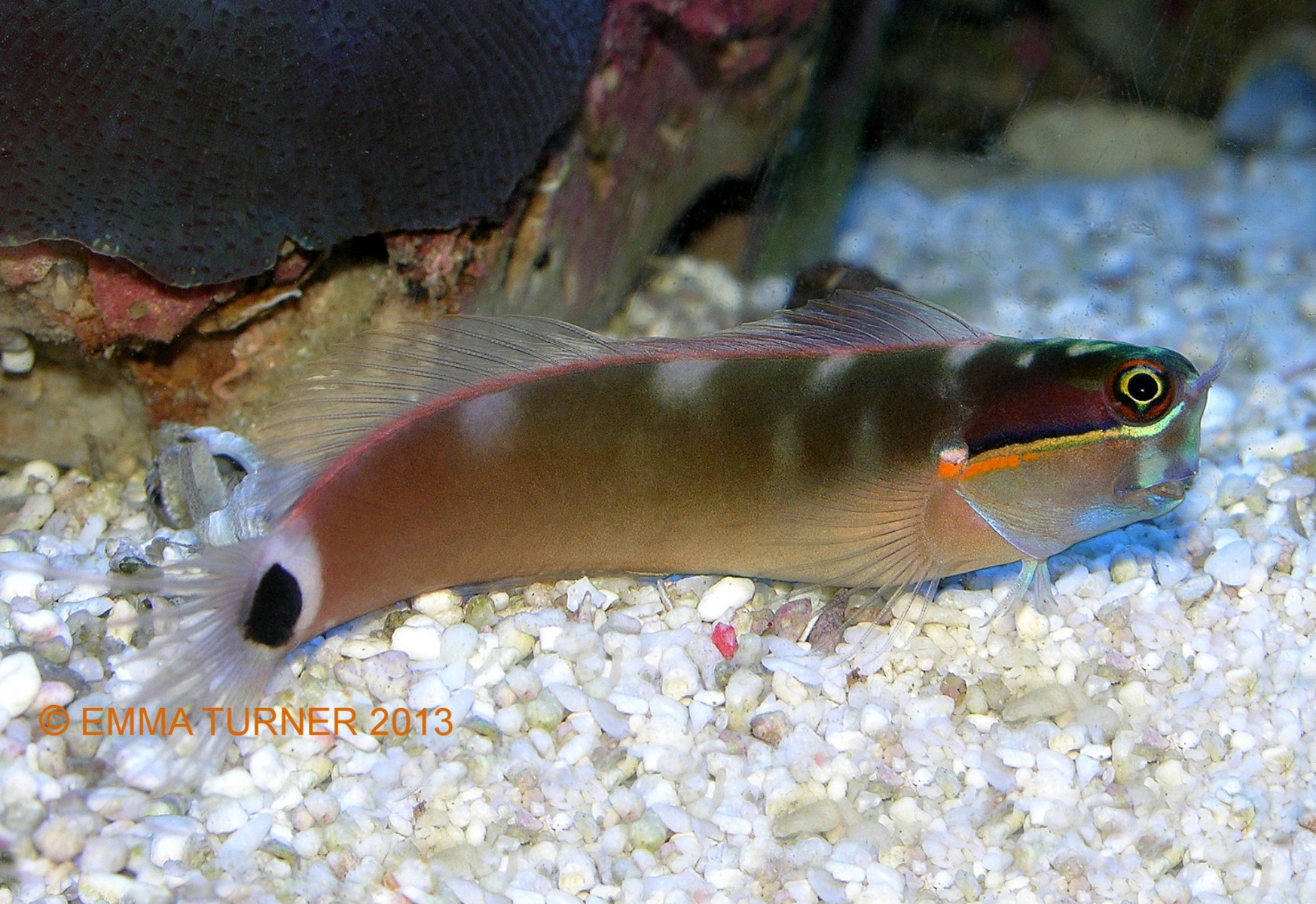 If your nano is equipped with a good skimmer and over-powered filtration, you might want to go in a different direction and choose a lazy ambush predator. Ambush predators such as Frogfish (Antennarius sp.) rely on camouflage which is ruined by movement. This means that these tiny couch potatoes will happily sit in one spot for days on end, confident that a meal will swim by sooner or later. Proportionally heavy fish, their need for heavy meals places an erratic loading on filtration, making a good protein skimmer essential to avoid spikes in pollution. 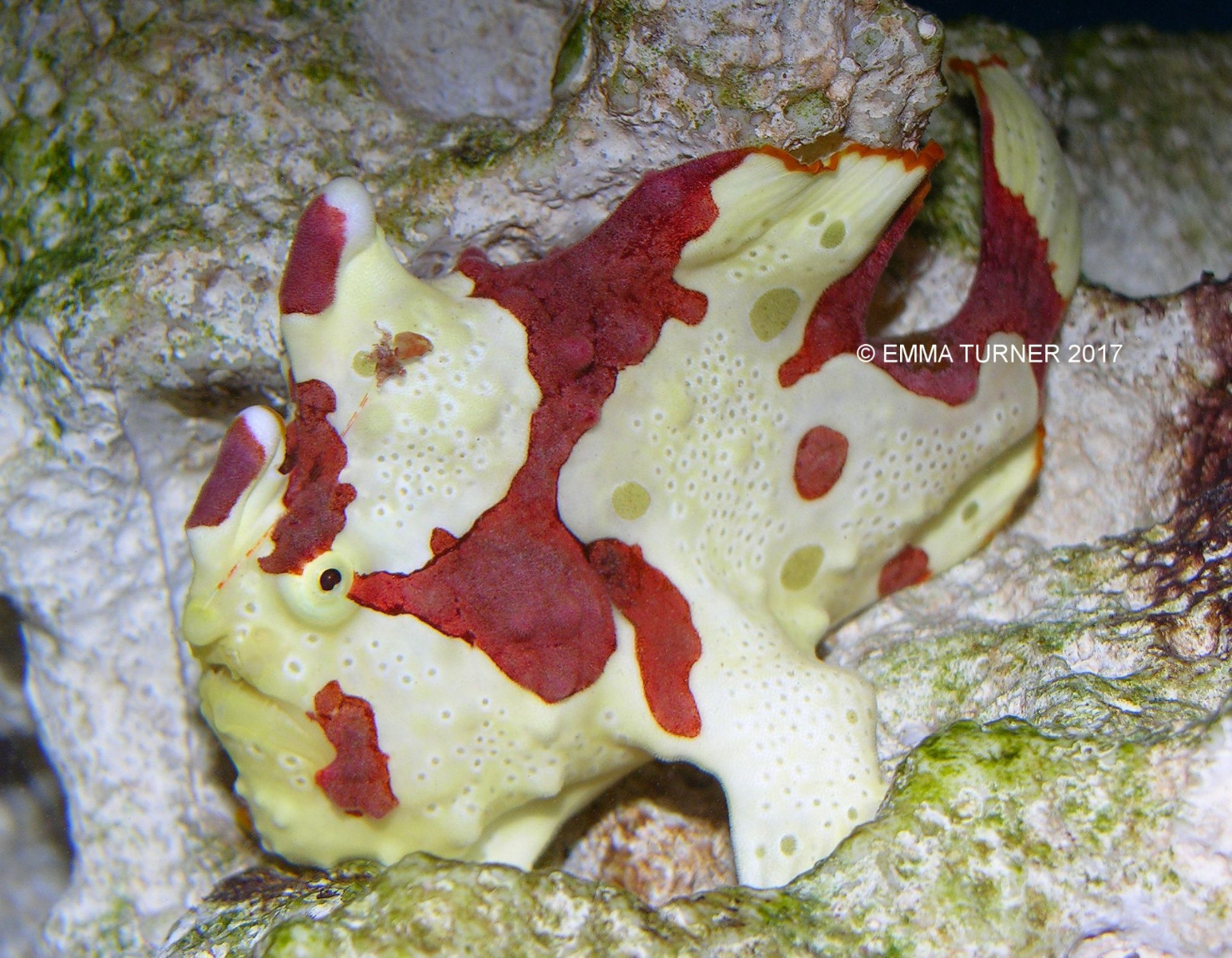 So, as usual I’ve sidetracked myself massively and somehow found reasons to stock a multitude of tiny tanks which does, after all, mean that a wider range of pets can be kept in a finite amount of space. As usual, this is a homework issue - at a time when knowledge is literally at your fingertips, there’s no excuse for repeating avoidable mistakes first made decades ago. Surprise yourself by housing small species in large aquaria or if you’re really pressed for space or looking for a special project, try the microcosm of a nano but go large on research.