October is here and another year has flashed by in a rather eventful whirl. Things are never quiet though, as our stores gear up for the shift from the pond season to the time of the tropicals.

Not all pondfish are as worried about the declining temperatures and for Golden orfe (Leuciscus idus) it won’t be time to snooze for weeks yet. These fish like cool water and high oxygen levels, which means that they can be added to a pond large enough to accommodate their active lifestyle until late autumn. Rather unusually, this batch at our Swindon store were housed in a glass system, giving a rare side view of these fish. 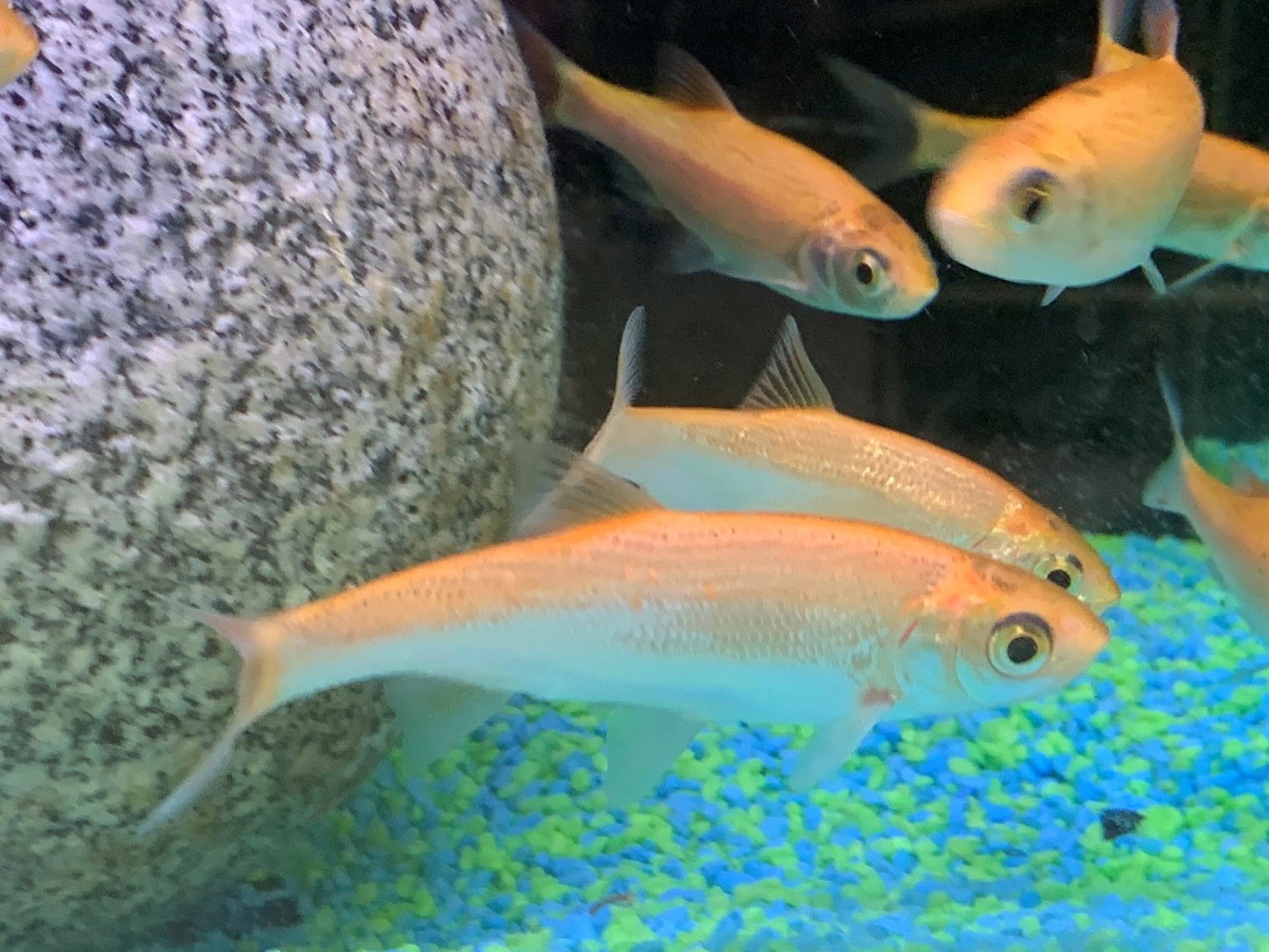 We were lucky enough to get a peek behind the scenes at Reefkeeper Windsor’s fragging facility recently and it’s hard not to be impressed by the work taking place. It would have been hard to imagine culturing corals from tiny cuttings years ago, but the scale and quality of these sustainable starter corals is mind blowing. We’re still firmly of the opinion that supporting mariculture in the native range of these animals is a vital part of conserving the reef but it’s great to think that you could build a coral reef at home using specimens that have been grown entirely in aquarium conditions. 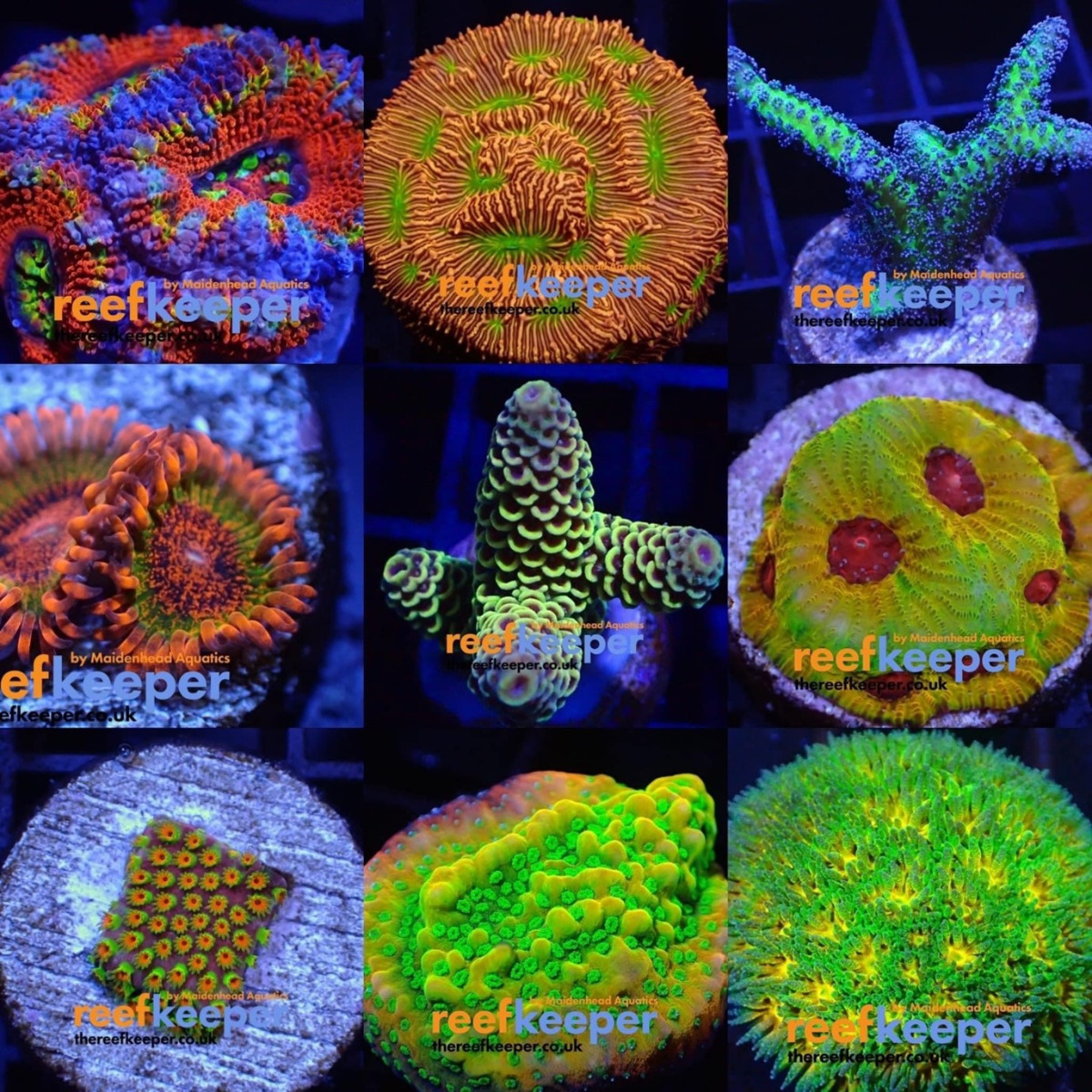 Fish are some of the keenest photobombers ever and as you can see, the real focus of this photo is meant to be the young pair of Red stone pigeon discus (Symphysodon x hybrid) cleaning the spawning cone behind this attention seeker at our Wenvoe store. Although this store has some of the best Japanese koi you’re likely to see in the UK, it also has a good selection of indoor fishes and discus are something of a speciality. Although less challenging than their wild ancestors, domestic discus are cichlids after all and enjoy the same interests as their less pampered relatives. For us keepers, that means keeping them in groups large enough to allow for a bit of sparring and healthy competition without any of them being singled out for bullying. This is especially important when keeping varieties that have lost the ability to communicate submission by displaying barred body markings. 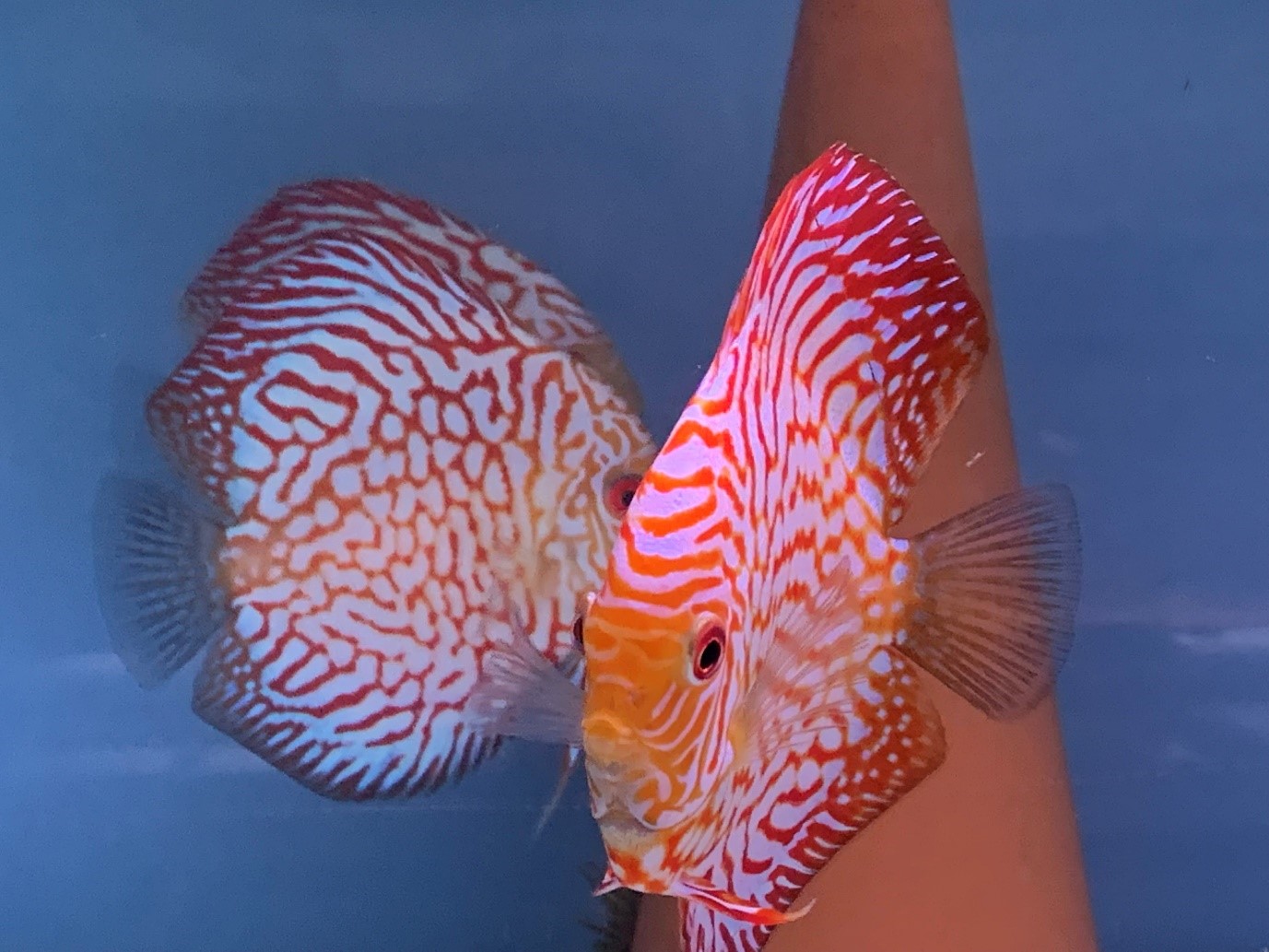 It has to be said that as far as working animals go, these Peppermint shrimps (Lysmata wurdemanni) are extremely attractive. Their chief virtue as aquarium residents is their appetite for nuisance anemones which can spread prolifically in reef aquaria and pose a hazard to both fishes and invertebrates. Not only will these quirky crustaceans earn their keep as janitors, they belong to the cleaner shrimp group which gladly remove parasites and damaged tissue from any fish which seeks their services. If they have a failing, it’s the fact that they’re rather shy in brightly lit conditions which is probably linked to the fact that their wild relatives tend to haunt caves and deeper water. These perky prawns at Cirencester had no such anxiety. 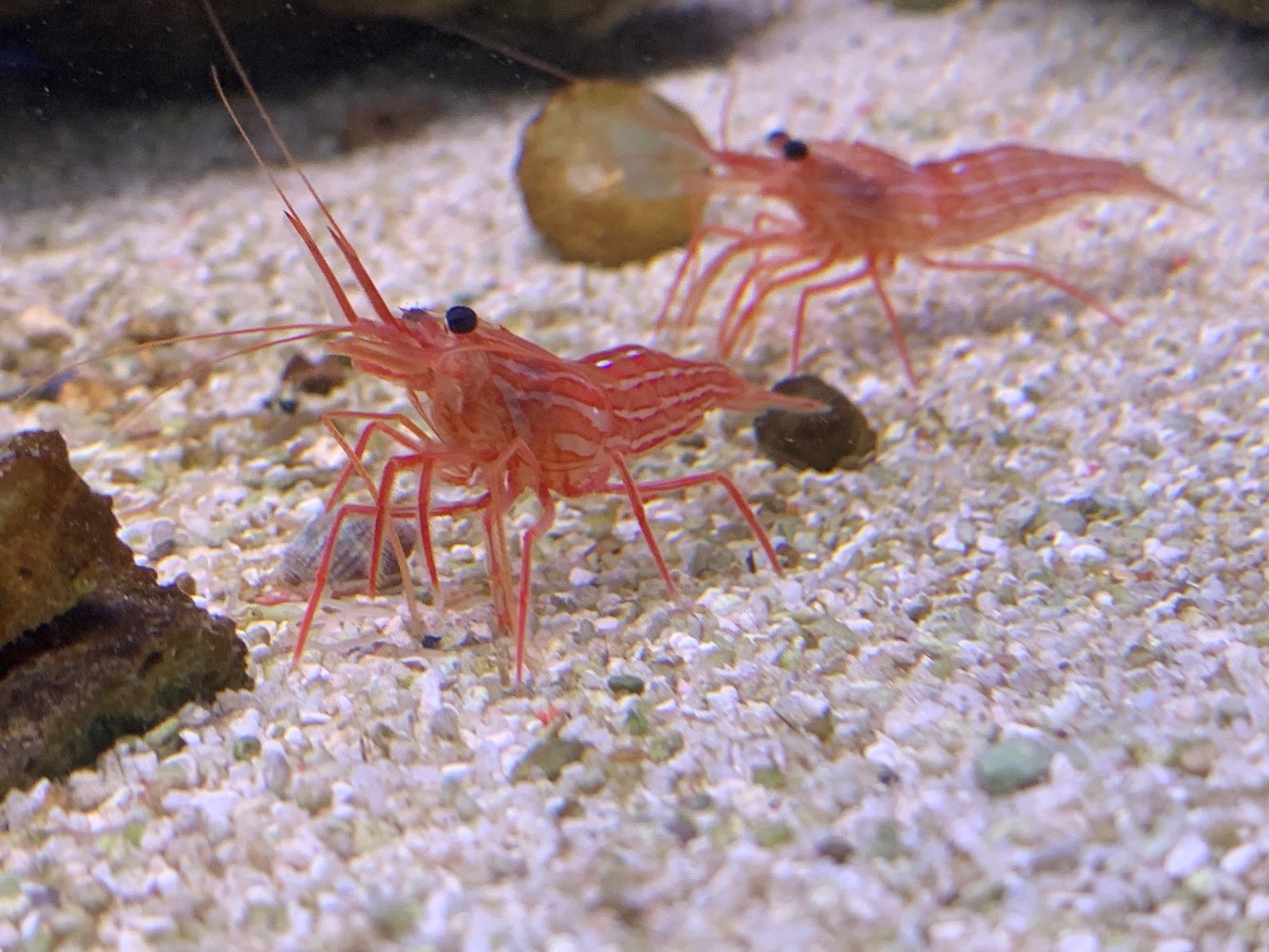 The time for pond varieties of goldfish to shine might be coming to a close, but their indoor fancy kin are happy to take the limelight. These Calico ryukin (Carassius auratus var.) are known for their distinctive high bodies and double tails but that slightly wiggly body contains a curious fish with a lot of character. Like all fancy goldfish types these are big messy fish as adults, that require a larger aquarium than most tropical fish to thrive. Given a chance to shine, they reward their hardworking keeper with a lot of charisma and make excellent pets. There’s a reason why they’ve been popular for hundreds of years. These particular fish were one of a number of eye-catching offerings at our Woking store. 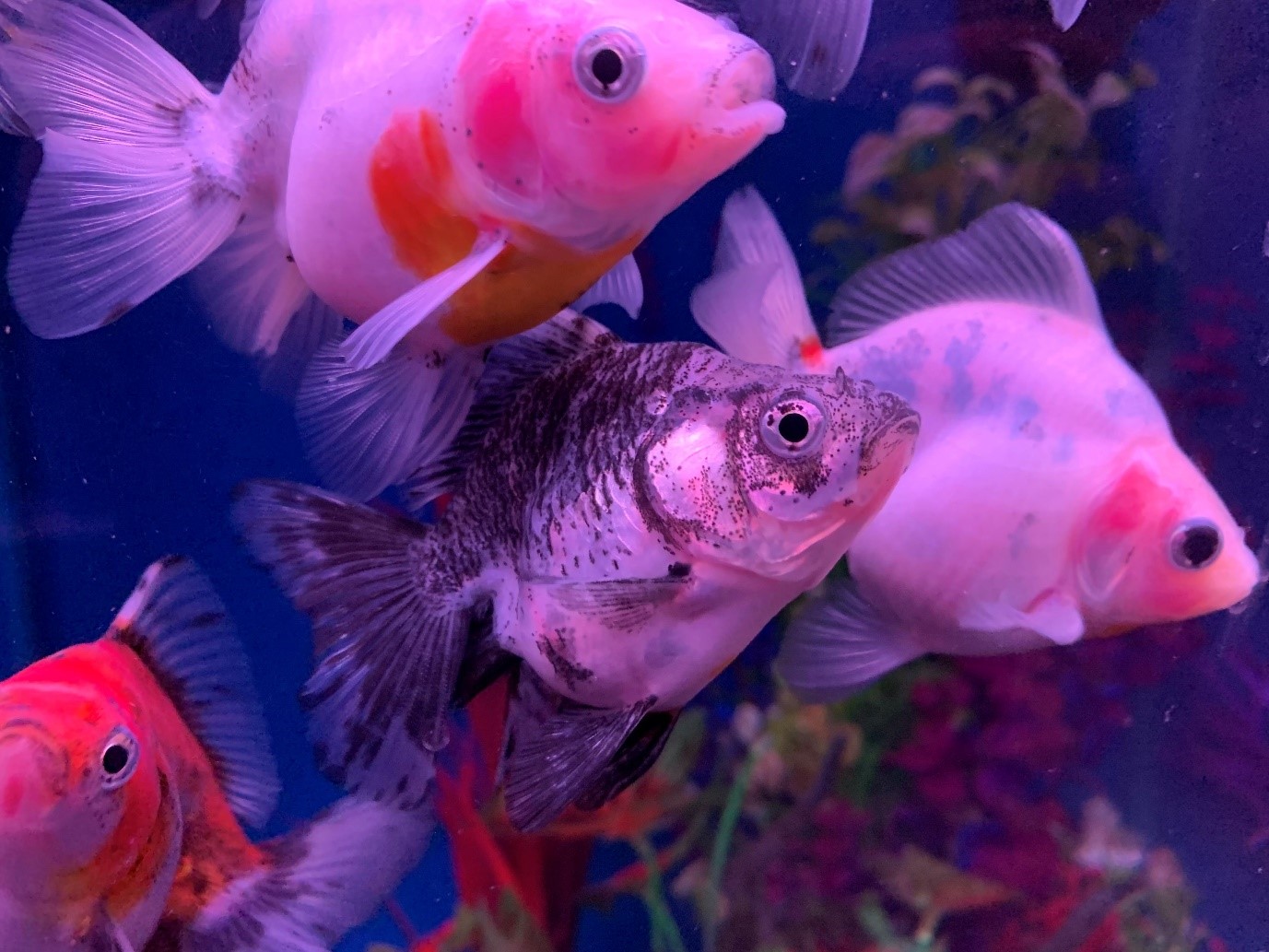