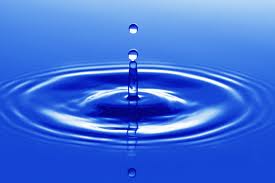 The key to a successful, healthy aquarium is in maintaining good water quality for the creatures in your care. Most fish health problems are caused by poor water quality and many factors can cause this to deteriorate, including the age of the aquarium, type and frequency of the maintenance you carry out, inadequate filtration, stocking levels, overfeeding, and so on. Test kits are an invaluable piece of equipment for fishkeepers, for both the novice and the more experienced hobbyist alike. It doesn’t matter how long someone has been keeping fish, no-one should be so complacent as to assume they’ll never need them. Newly set-up aquariums should be monitored very frequently, especially within the first six weeks, and more mature aquariums should still be checked on a regular basis and a note of the results logged in a diary. Test kits are your first port of call should you experience any problems within the tank, and are essential for monitoring water quality, for instance, after a power cut, when some of the beneficial filter bacteria may have died back. It is uncanny that many problems do seem to make themselves known in the evening when your local aquatics store is likely to be closed. Having a test kit on-hand gives you an almost instant water chemistry check, from which you can then take immediate appropriate action. Waiting several hours until the shop opens could prove costly to your fish. During the maturation period, the water in the aquarium undergoes massive swings in toxicity. The aim is to establish a colony of beneficial bacteria within the filter, which converts ammonia to nitrItes, and nitrItes to nitrates. High levels of ammonia and nitrItes are toxic to aquatic life. 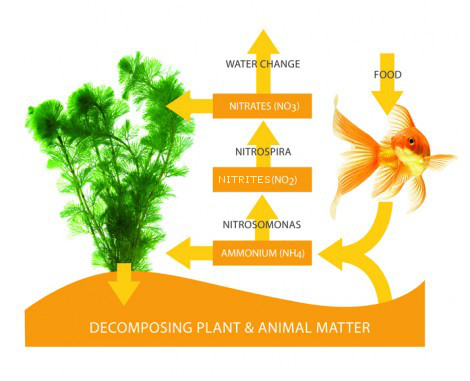 The ‘Nitrogen Cycle’:
When the aquarium is first started up with the use of ‘cycling products’, the level of ammonia naturally rises to an alarming level. After this has peaked, it then falls rapidly until the level is negligible. As the level of ammonia decreases, the nitrItes increase, until, they too peak, and then start to decline as they are converted into less harmful nitrate. Living aquariums cannot be created overnight – indeed the maturation period takes weeks rather than days, after which time the water reaches its optimum chemistry to support life. Only when both ammonia and nitrIte levels are both on zero, should fish be added to the aquarium and only in small numbers at a time.
This enables the bacteria within the filter to gradually build up and cope properly on an ongoing basis with the waste that is being produced by the fish. This waste often referred to as ‘organic matter’, is released into the aquarium as ammonia. The ammonia is then oxidised by an aerobic bacterium known as Nitrosomonas, and in turn, changes the ammonia into nitrIte. The second type of bacterium, known as Nitrobacter, then converts the nitrIte into nitrate, again by a process of oxidisation.
Nitrates are the ‘end product’ of the nitrogen cycle, and although a small amount may be used up by live aquatics plants (if present), the majority has to be manually removed by the regular partial water changing process. You should aim to change approximately 10-15% of the total aquarium volume at least once a week, twice if possible. Nitrates should be kept below 40ppm at all times for the continued wellbeing of your fish. If this level creeps up, you may be overfeeding, be overstocked, or not carrying out enough frequent partial water changes. Of course, it is a good idea to check the level of nitrate in your tap water, and if it is high to start with, consider using Reverse Osmosis (R.O.) water instead, which is free of all impurities.
High levels of nitrate can contribute to algae problems within the aquarium too. Remember – never change 100% of the aquarium water in one go, as this will kill off all the beneficial bacteria in the filter which act as a ‘sewage factory’ for your fish, breaking down their waste products into less harmful substances. Also remember that when you come to clean your filter, never rinse your filter sponges under the tap, as the chlorine in tap water (which is there for our benefit to make the water safe to drink) is actually lethal to the beneficial bacteria. Instead, give the sponges a quick rinse in a bucket of water taken from the tank, and do not worry if these sponges are not pristine when you put them back.
You only need to replace the sponges if they don’t bounce back into shape immediately after squeezing them, or if they become excessively clogged. In this instance replace only one at a time, and for smaller filters that only contain one sponge, cut it in half and replace one half at a time, so as not to lose all the beneficial bacteria.

pH:
pH (pondus hydrogenii) is a measurement of the acidity or alkalinity of the water. It is measured on a scale of 0 to 14, with readings below 7 (neutral) considered acidic, and readings above 7 referred to as alkaline or basic. The scale is lotharithmic, so a change from 7 to 6 is a decrease of 10, a change from 7 to 5 is a decrease of 100 and so on. The pH value of the water is important, as different fish species prefer different conditions. pH is interconnected with other water quality parameters, an example being that a high pH causes even the tiniest quantity of ammonia in the water to be highly toxic. Small natural swings in pH do occur in planted aquariums, due to the production of oxygen and carbon dioxide which occur during the photosynthesis process. These changes are usually very minimal (around 0.2 on the scale) and will not pose a problem to your fish. After all, many species will experience similar changes in their natural habitats from day tonight. Most fish can be kept within the region of pH 6.5-8.0, and (unless specialist fish are being kept that require a more extreme pH level) the exact level is not usually overly critical, provided that it remains stable. If you do need to alter the pH level of your water, this can easily be achieved by many of the pH altering products available. When trying to reduce the pH, you may need to lower the KH (discussed later) first, otherwise, the pH may try to revert to its original level. Certain substrate choices and décor (sands, rocks, bogwood etc) may contain substances that can alter pH, so should be chosen with care. There are many ‘inert’ choices which will not affect your water chemistry.

General hardness, or GH as it’s known, is the measure of (primarily) calcium and magnesium ions in the water, as well as those of carbonates and sulphates. These are often referred to as ‘dissolved salts’. You will find that GH is expressed as either part per million (ppm) of calcium carbonate, or as degrees hardness (°dH). As a general rule, water hardness follows these criteria:0-4 °dH (0-70 ppm) = very soft4-8 °dH (70-140 ppm) = soft8-12 °dH (140-210 ppm) = medium12-18 °dH (210-320 ppm) = hard18-30 °dH (320-530 ppm) = very hardSo a low GH indicates softer water, and a higher GH, harder water. Different species of fish prefer different GH levels and you should try to provide them with their requirements for best long-term health. Again, different choices of substrate and décor can affect the hardness level of the water, so be sure to check what you are planning on using.
KH:
KH, or carbonate hardness, is sometimes referred to as buffering capacity. This is in reference to the water’s ability to resist changes in pH. When the KH is low, it can cause problems to both fish and plants because the pH is liable to ‘swing’ i.e. change rapidly. If your KH is too low, the use of a buffering product will be beneficial, and if it is too high, consider using R.O. water for your water changes or add some aquarium peat into your filter.
Phosphate:
Phosphates are a source of nutrients that contribute to extensive algal blooms within the aquarium and can accumulate in the water at quite an alarming rate. Some regions (i.e. near farming communities) have naturally high levels of phosphate in their tap water, plus many dried fish-foods contain surprisingly high levels of phosphate, which soon build-up within the confines of an aquarium. It is not thought to be toxic to fish unless present in extremely high levels, but remember phosphates feed algae, and in turn, excessive amounts of algae can starve the aquarium of oxygen, which could spell disaster for your fish if not kept in check. Water changes with R.O. water, plus the use of a phosphate-removing resin in your filter will help to reduce it.

If you have any questions regarding water chemistry, please do not hesitate to ask a member of staff at your local branch of Maidenhead Aquatics.
Categories Aquarium
Share