It’s been a funny old year, as usual though, the weather has given us some highlights and the usual late summer storms have given us classic ‘Orfe on the lawn’ weather. It’s time to contemplate what’s going on in our water gardens and what motivates orfe to go wandering. 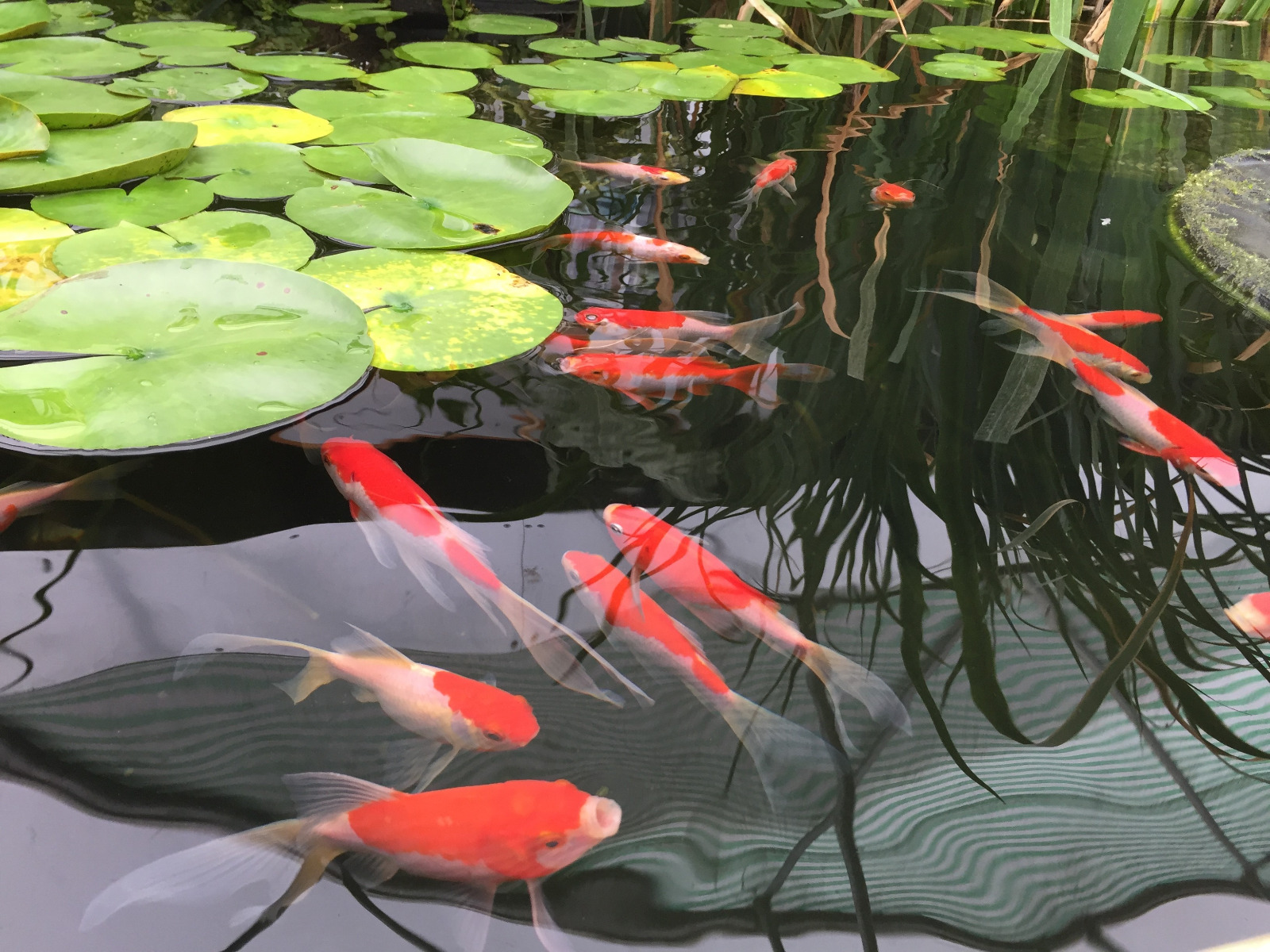 Unlike indoor aquaria, many garden ponds are in an almost constant state of flux. Temperature, pH, KH and oxygen levels can vary wildly even in the course of a day and this can be a struggle for some of the inhabitants.

Temperature is the simplest to understand, as it’s all about sunshine and evaporation. A pond in a hot, sunny position can be as warm as a tropical aquarium but depending on the water circulation, this can either be a static layer of surface water or an overall warming effect on the entire volume as it journeys around the pond. Fishes can often be seen basking at the water’s surface, especially in more sedate planted ponds where the lower levels remain cooler. This is another reason for digging deep ponds for koi, as it gives a surface area to volume ratio that helps to avoid extremes of temperature. Unlike their pampered tropical cousins, it’s almost the norm for pond fish to be kept in an environment where the simple act of swimming from the surface to the bottom of the pond exposes them to temperature variations. Evaporation will lead to cooling and this effect can be boosted by night time circulation of the pond water.

Summer warmth is a double edged sword - it boosts growth and immune function but lowers available oxygen content, as water holds less oxygen at higher temperatures. In the aquarium-like conditions of a well stocked koi pond, supplementary aeration with an air pump or a venturi can allow your fish to enjoy the benefits without the drawbacks.

As oxygen is pivotal to pH and KH, I’ll forget about the sequence listed above and tackle this one first. Oxygen, as we all know, is produced by photosynthesis both above and below water. This is great on a sunny day and oxygenating plants are well named during the hours of daylight. In the absence of light however, both plants and algae respire like we do and remove oxygen from the water which leads to a drop in oxygen levels and a rise in carbon dioxide - which dissolves to form carbonic acid. This means that at the end of a hot summer night, oxygen levels and pH can be at levels which are harmful to the fish. The worst affected individuals are generally the largest and because most of us don’t see our garden ponds until hours after dawn, we find an inexplicable crime scene where natural processes have restored oxygen and pH levels, leaving mysterious fish losses. If you have a pH test kit and a heavily-planted pond you can observe this phenomenon by taking measurements in the evening and as early in the morning as you can muster. As you can see, excessive growth of oxygenating plants can lead to a lethal shortage of oxygen, especially in ponds that lack pumps or filtration. Note that ponds where fountains and waterfalls are turned off at night are almost run the wrong way around from a purely biological standpoint. Water movement is far more important at night in a planted garden pond.

It’s not only submerged plants that cause this daily swing, algae both in the form of green water and blanketweed, will function in exactly the same way. Pond plants with their foliage above water will be using atmospheric oxygen and are entirely free of negative impacts.

On the subject of algae control, this is where the chemical-free control of an ultraviolet clarifier scores heavily as it avoids the drastic algae die-off that is a feature of algaecides. Just when you need them the most (hot, sunny days) the use of these chemicals can be the most dangerous, as the warm temperatures mean oxygen levels are lowered right at the point where dying algal cells are consuming oxygen as they get broken down. In the event of serious green water or blanketweed issues, performing a large water change, or removing as much algae as possible manually, before adding treatments is the way to proceed.

Treatments of many kinds will lower oxygen levels and should you find yourself treating fish for any ailments, especially parasites which can affect gill function, you’ll want to boost oxygen levels to ensure a quick return to full fitness.

Intervention in the shape of an air pump or fountain is also a good idea and avoids all of these low oxygen scenarios. 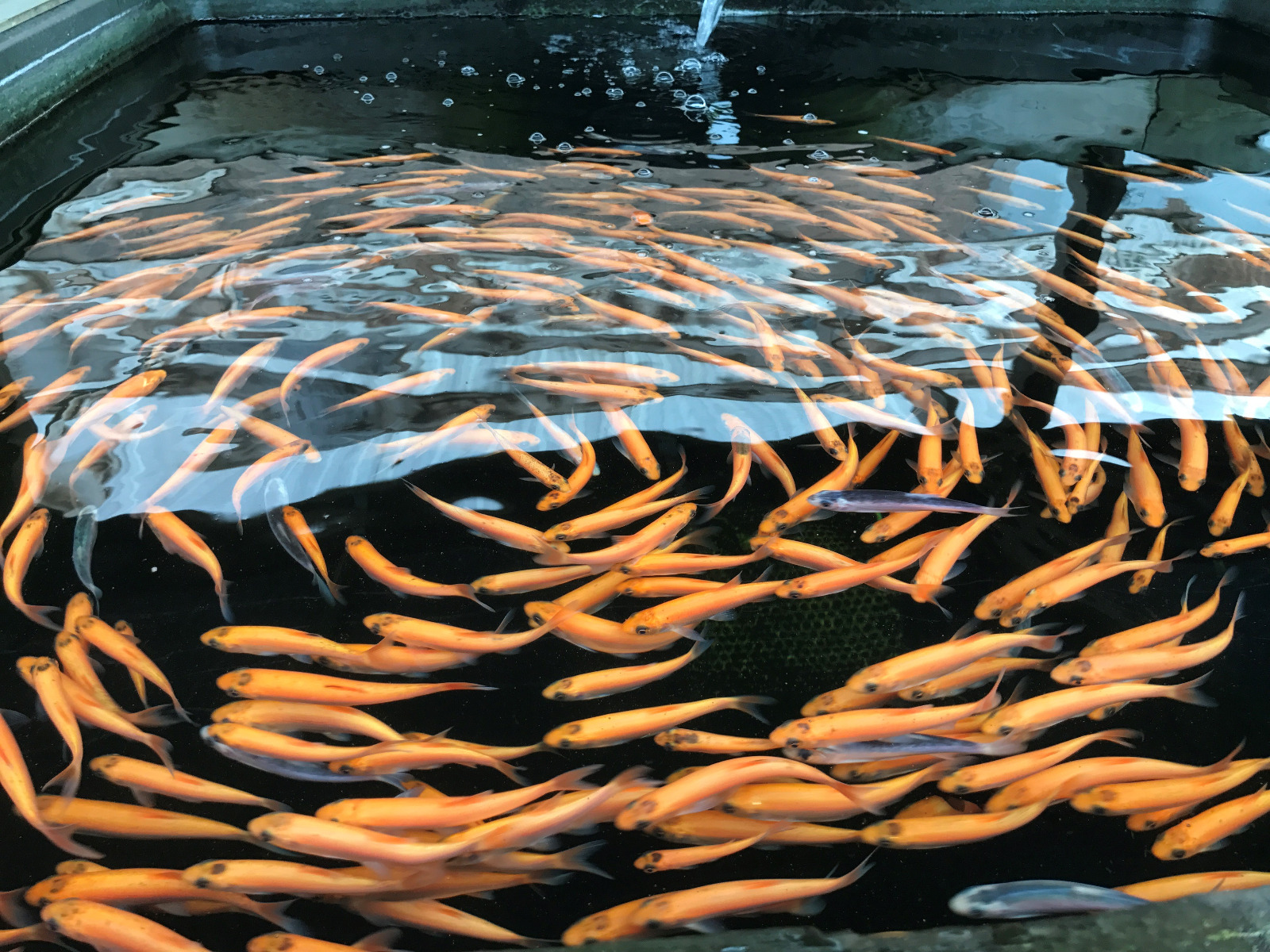 This is the point where the orfe are leaping in search of a better life. Typically they’re a favourite choice for planted ponds, as amongst their many virtues is a peaceful coexistence with lilies and other aquatic foliage, unlike the agents of destruction that are koi. This means that these active fishes that would naturally be found in large rivers and lakes find themselves in an inhospitable environment as summer storms lower the oxygen levels even further, prompting them to take extreme measures in the hope of finding flowing, oxygen rich water either upstream or within leaping distance of a dwindling pool. As relative newcomers to the pond scene, sturgeon are also another riverine species that run into difficulties in these conditions but their comparative scarcity means fewer people have found them on their lawns. On reflection, it’s probably better to keep both species in the kind of ponds more typically associated with koi, where large volumes of open water are turned over regularly by strong pumps and large filters.

Having looked at temperature and oxygen, it’s only fair to state the importance of KH or carbonate hardness. KH is a measurement of the amount of carbonates present in the water, these function to keep the pH stable by neutralising the effect of acids (such as carbonic acid) which would otherwise lower the pH. They also play a role in the health of the fish and are key to proper function of bodily fluids.

Most of the biological processes occurring in any pond, from overnight drops in oxygen, to actions of filter bacteria and even the act of fishes breathing will deplete carbonates. The additional metabolic demands of feeding hungry fish in warm weather will speed up the rate of demand, in line with oxygen depletion. Depending on your location, you may find your tap water has a high KH but this won’t necessarily be linked to a high general hardness (GH) and if you’re using rain water it’ll generally be free of carbonates, meaning that although it’s free of the phosphates and nitrates that nuisance algae love, heavy rainfall will lower KH levels. This means that you’ll want to top up your buffers to ensure healthy biological function of your fishes and filter bacteria, as well as safeguarding against a pH crash.

In systems with low KH or high bioload, adding a buffer will improve the health of your pond and its inhabitants.

White Spot (Ichthyophthirius multifiliis) is one of the most common diseases in ornamental fish. Find out everything you need to know to care for your freshwater fish along with products you can use to treat this condition.

We’ve put together our top tips to help you get the most out of your pond this autumn and to make sure your fish are well-prepared for the onslaught of winter.

Check out the latest news in the fishkeeping industry as we all attempt to get back to some form of normality and find out about a number of new products to hit our stores very soon including a new product in our AquaCare range of treatments and a couple of fantastic new aquariums to look out for.