When you work in a fish shop, you get used to the fact that some fish don’t really sell themselves as much as the flamboyant livebearers or neons do. These Cinderella fish don’t tend to blossom into full colour without time or the right conditions, such as a planted aquarium.

Weeks of lockdown have given some of these slow burners a chance to shine and these Odessa barbs (Pethia padamya) at Reefkeeper Rugby are currently making donning a mask worthwhile. 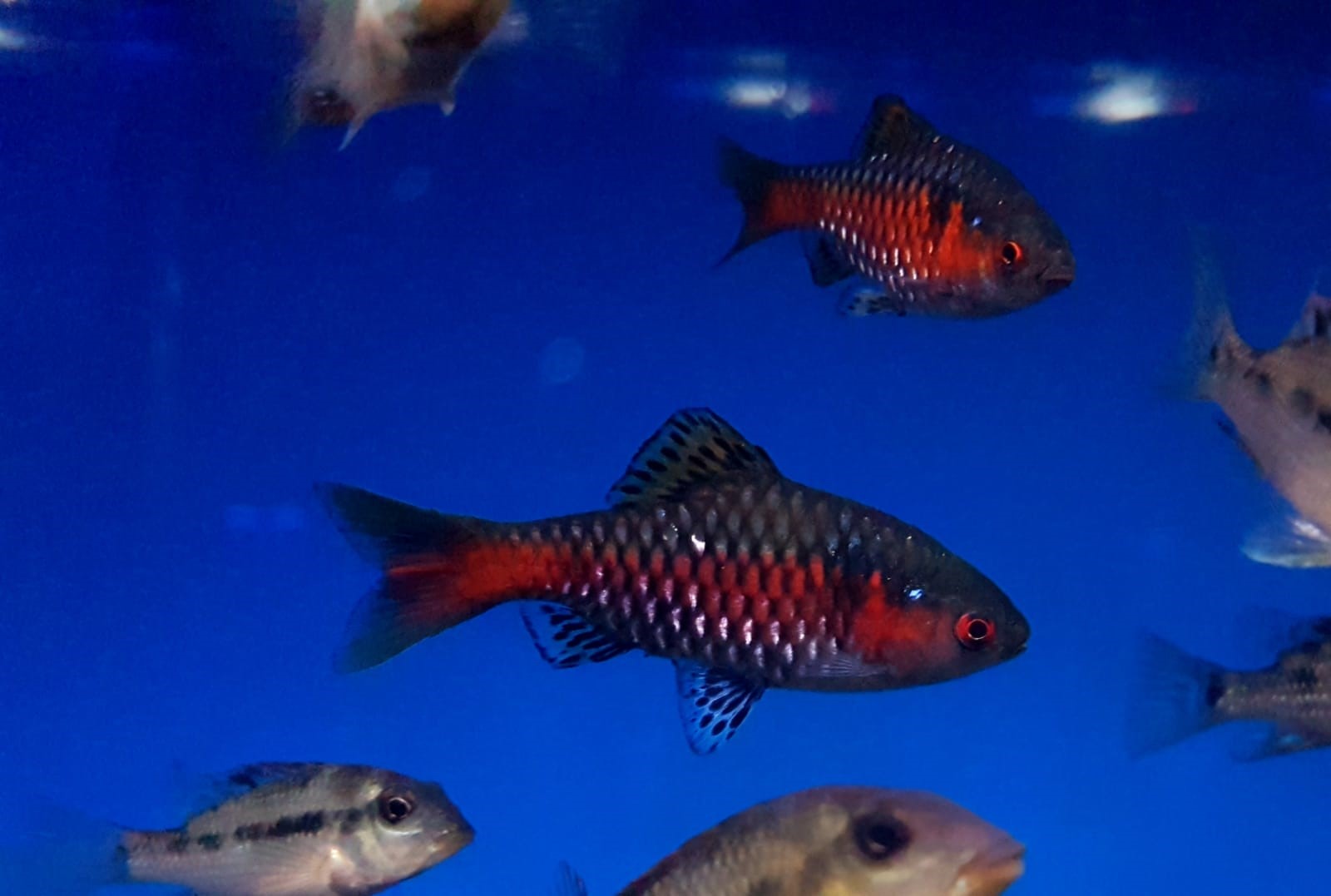 Odessa barbs are familiar now but this hasn’t always been the case. First imported in 1971 when they appeared in a market in what was then a part of the Soviet Union, these fish may be named after a Ukrainian city but that’s not where they originated. The mystery surrounding this fish continued to give rise to speculation, including a theory that they were aquarium bred hybrids that didn’t exist in the wild. Finally, in 2001 their wild home range was discovered in Myanmar (formerly Burma), suitably and rather poetically centred around an artificial pool above a waterfall. In 2008 they were finally scientifically described and received their binomial name, which means Ruby in the native tongue and describes the glowing red colour of courting males.

Aquarium care is far less shrouded in mystery and this species is suitable for temperate and tropical aquaria, as well as thriving in secure outdoor accommodation during the summer thanks to a tolerance for temperatures in the teens. Males will show their best colour in mixed-sex shoals, where they’ll attempt to outshine one another to impress the less showy females - provide some cover in the shape of hardy plants and make sure that they have sufficient space to avoid one another if they choose. As their wild ancestors hail from alkaline water, make sure that KH levels remain high enough to ensure pH remains above neutral and you should be rewarded with years of colour and interest.

Our Stores , Aquarium
One L of a Bargain

It’s that time of year again, as the days start to shorten and the water lily leaves begin to fade, the new season of tropical imports begins. As expected, freight charges and other costs have increased, which means that the many catfishes which have been quietly growing-on in our stores during lockdown are at prices that are unlikely to be seen again. Read on...

It’s been a funny old year, as usual though, the weather has given us some highlights and the usual late summer storms have given us classic ‘Orfe on the lawn’ weather. It’s time to contemplate what’s going on in our water gardens and what motivates orfe to go wandering.

Fishkeeping is a fantastic hobby that can often last a lifetime. When starting with Fishkeeping sometimes less is more, and this is why the Fluval Flex is a great starter aquarium, making it ideal as the centrepiece of our Fishkeeper Fry programme. Not only does it allow you to learn the tricks of the trade, but it can allow you to have a wide array of choice of livestock to keep.