Your guide to Aquarium Lighting

Choosing the appropriate lighting for your aquarium may seem like a bit of a minefield with all the numerous different types available; and terminology such as colour temperature and Kelvin rating can make things seem a little overwhelming. The type of lighting that you choose really depends on the job it needs to fulfil, and prior to purchase you need to consider the pros and cons of each to see which is most suitable for your proposed set-up.

There are several factors to consider when selecting the most suitable illumination for your aquarium. Firstly, is the tank freshwater or marine, and will it house fish only or will it also be supporting plant life/corals as well? Next, consider the size of your aquarium – in addition to the length, bear in mind that deeper water may require brighter lighting. Lastly, your budget will play a huge part in which type you choose. What may seem like a more expensive buy to start with, may well end up saving money in the long run when comparing running costs.

It is important to remember that when lighting an aquarium, we are striving to accurately simulate the daily conditions under which the inhabitants of the tank would habitually live in the wild. Naturally, the aquarist wants to illuminate the tank in order to view their fish, and whilst it may be as simple as providing set hours of day and night (light and dark) for a fish-only setup via a general-purpose aquarium bulb, specific light spectrums are essential to the continued health and growth of plants and corals. It is also important to control the amount of light the tank receives, if too little is provided, the plants and corals may die, and if too much light is supplied, the aquarium could become overrun with algae. Generally, around 8-10 hours of light per day is recommended for freshwater planted tanks, and a 10-12 hour photoperiod for reef set-ups.

Colour temperature is a term that is often encountered when choosing lighting for specific aquariums. During the 19th century, British physicist William Thompson (Lord Kelvin) devised an absolute thermodynamic temperature scale. During his research, he heated a blackbody radiator which firstly began to glow red, then as the temperature increased it turned yellow, eventually producing a bright blue-white light at the highest temperature. These light colours always follow a pattern and occur at specific temperatures, which is expressed in degrees Kelvin (K).

Light is comprised of seven colours, and sunlight (measured at 5500K) emits all seven colours, making the light appear white. Lights with a lower Kelvin rating e.g. 4000K emit a reddish hue (long wavelength/less energy)and those with a higher Kelvin rating e.g. 7500K+appear blue (short wavelength/high energy), meaning that lower colour temperatures indicate a 'warmer' light, and higher colour temperatures equate to a 'cooler' light. To complicate things further, light also changes the further it penetrates down into the water, particularly notable for deeper regions of the ocean where only some colours of light will reach the bottom. This is because when light travels through water, longer wavelength (red) light is absorbed first, with the shorter wavelengths (blue) travelling much deeper and scattering in different directions, making the water appear blue.

There have been many advances in aquarium lighting technology in recent times, helping us to replicate specific lighting conditions with ease. Here we detail the pros and cons of each type to help you make an informed decision when purchasing.

Undoubtedly still the most common type of aquarium illumination, fluorescent lighting is available in the form of long tubes, either T8 (old style, larger diameter) or T5 (newer, narrower diameter). The tube/s come in a variety of lengths and sit inside the hood of the tank. Their outputcan be further enhanced by the use of a reflector placed behind to angle more light into the aquarium. Fluorescent lighting is available in many different wavelengths, including a warmer (reddish) light to show off tropical fish colours, daylight simulation bulbs (good for both growing plants and for displaying the fish), specific plant bulbs (aimed at heavily planted aquaria), and marine (blue) bulbs. A typical 'full spectrum' bulb will have a rating of between 5000-6500K and is ideal for planted aquaria. T5 bulbs have an advantage over the older T8 equivalents in that they are more compact, emit a brighter light, and last approximately 25% longer. This type of lighting is cheaper than other types, is readily obtainable, and is available in many different spectrums to suit individual needs. The downsides are that fluorescent lighting emits heat (so a chiller may be required to maintain your desired water temperature) and these bulbs are not as long-lasting as more modern light sources such as LEDs. Be aware that although the bulbs may still be starting up ok after 6-12 months, they may not be giving out the correct spectrum of light and will need replacing if you are to maintain optimum conditions within a tank containing plants or corals.

LED (Light Emitting Diode) lighting is relatively new to the hobby and, due to so many advantages, is fast becoming the lighting of choice for many. LEDs generate a penetrating light with consistent colour spectrum throughout their lifespan, a huge benefit over fluorescents which will require frequent replacement due to colour shift after several months. LEDs are compact and available to fit any aquarium, from small clip-on units for nano tanks, to simple slimline strips (solid or flexible) for standard aquariums, submersible spotlights, and even modular tiles for larger displays which can be suspended above the tank and placed adjacently to form giant LED panels. Although the initial cost will be greater than that of fluorescent tubes, the low operating costs will more than makeup for this in the long run, particularly as the LEDs will not require periodic replacement. Most units claim to run for around 10 years. LEDs do not generate heat, so will not necessitate the use of a chiller on the aquarium, and many can be controlled remotely and are dimmable. Another bonus is the beautiful shimmer effect LED lighting creates, akin to natural sunlight streaming through the water. LEDs are available in a variety of colours to suit all types of aquarium including fish-only, planted, and marine reef.

Metal halide lighting produces powerful illumination via an electric arc passing through a bulb containing a gaseous mixture of mercury vapour and metal halides (compounds of metals with bromine or iodine). This high-intensity light penetrates deep into aquaria giving a similar shimmer effect to LEDs, is long-lasting, and has low running costs. However, the bulbs and their units can be a little expensive compared to other lighting types, and as this kind of lighting generates a lot of heat, a chiller may be required to keep the water temperature at an acceptable level. Metal halides with a colour temperature of 5500-6000K replicate natural sunlight - perfect for freshwater planted aquaria. Bulbs with a colour temperature rating of 10000-20000K are ideal for marine reefs, promoting rich coral growth. Most metal halide units will need to be suspended from the ceiling above the tank, although some smaller units come with fixtures to allow you to stand the unit over the top of the aquarium.

At Maidenhead Aquatics, we offer a wide choice in aquarium lighting, a selection of which can be found on our website, with even more choices in-store. Many products can also be ordered in for you if not on the shelf, so please feel free to ask a friendly member of staff. And for those looking for a lighting bargain, our lighting clearance page may be found here. 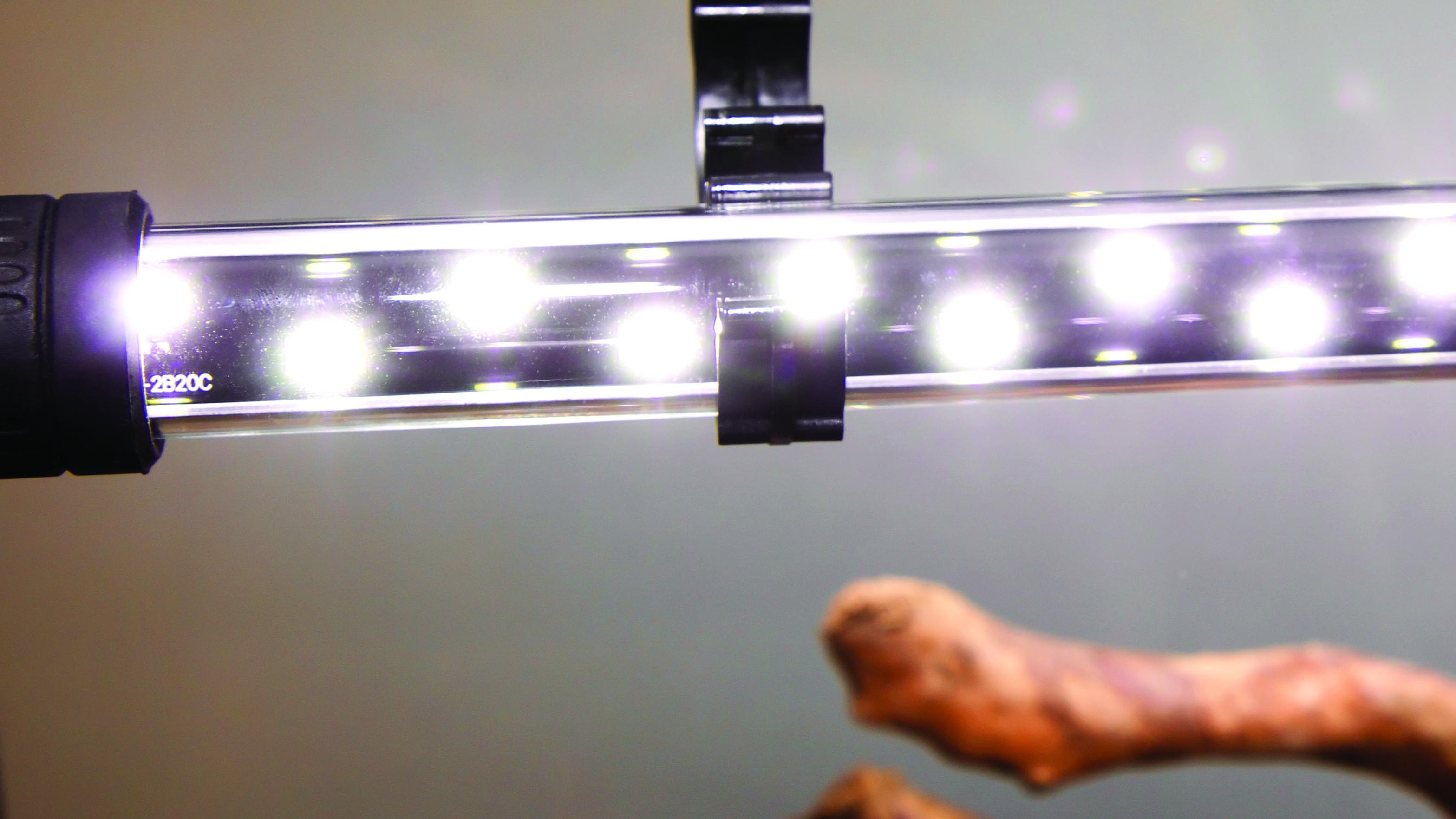 Although pond season is in full swing, our stores are still full of amazing aquarium species worth checking out. Take a look at just some of Paul Tapley's top finds in our stores this month.

Firstly, I feel I need to apologise to you all as it’s been far too long since I last wrote this feature. In fact, I was extremely shocked to learn that my last piece was way back in October of last year but needless to say, one heck of a lot has happened since then….. Read on to find out what's been happening over the last few months at Maidenhead Aquatics by Stuart Ashley, one of our Senior Partners.

Pond
How to build a new pond

Regardless of the type of pond you’re planning, there are some guidelines that apply to them all. Here's everything you need to know to get going with a new pond in your garden this season.